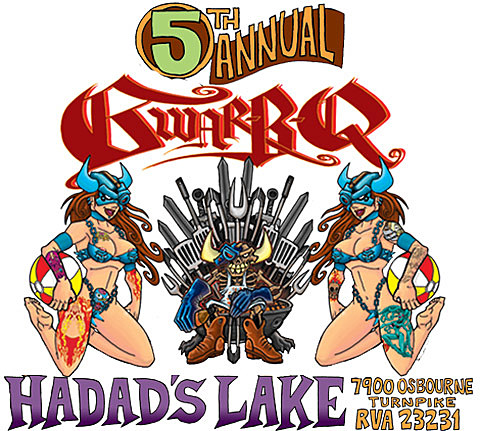 The first wave of bands have been confirmed for the 5th Annual GWAR-B-Q.  Held in Richmond, Virginia at Hadad's Lake on August 16, the fest will feature a lineup including Body Count, Meatmen, Iron Reagan, Goatwhore, Noisem, and Hatebreed, the last of which you can catch on May 17 at the Black N' Blue Bowl. Ticket details are still TBA for the GWAR-B-Q but a full list of bands is below.

The Ice T-led Body Count's appearance is being billed as "very special," with the press release adding, "...TV executives were bribed and beaten to get Ice T off the set of Law and Order SVU." The group have their fifth LP, Manslaughter, scheduled for release this year.

In addition to the live show, it was also announced that GWAR-B-Q will be preceded by a free-to-attend Dave Brockie memorial taking place on August 15, 4 PM to 7 PM, at the same grounds as the fest. The press release notes:

Fans, friends, family and bohabs will have the opportunity to pay their respects, as they drunkenly toast with a GWAR Beer in one hand, while wearing the commemorative Dave Brockie Fund vomit stained t-shirt as Oderus Urungus is set ablaze in a Viking Funeral Pyre on the lake.

Dave Brockie, GWAR's singer and longest serving member, passed away last month. A fund was set up in his honor which you can find more information on here.

Catch the full band list, the GWAR-B-Q commercial, a Body Count set from 1992, and, for kicks, that one Black Sabbath song with Ice T on it (no, really) below.