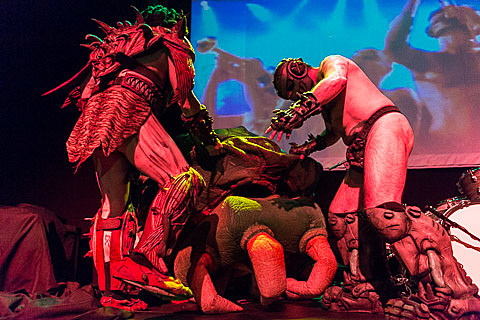 GWAR, who were just in NYC for the Empire Records 20th anniversary, will be putting on another installment of their annual GWAR-B-Q this year. The fest happens in Richmond from August 14-16. Day 1 happens at two RVA venues, The National and The Broadberry, day 2 happens at Hadad's Lake, and the final day will have a "Brutal Brunch" at the new GWARbar.

Bands announced so far include Descendents, Down, The Dickies, Goatwhore, MC Chris and Dead Earth Politics, with many more TBA. Ticket info will be announced soon, and like in past years, part of the proceeds will benefit Ring Dog Rescue.

Meanwhile, the band are currently dealing with legal trouble from their late frontman Dave Brockie's father.

For Descendents, this is their third 2015 show announced so far, including the free Converse Boston show and Atlanta's Wrecking Ball festival.