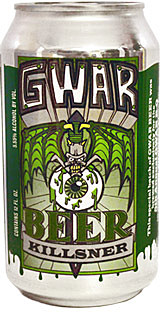 GWAR and Tampa's Cigar City Brewing have brewed up a batch of beer, called "Killsner," for the upcoming GWAR-B-Q which happens on August 16 at Hadad Lake, VA. According to Cigar City, Killsner is "a light, crushable pale ale brewed with an obnoxious amount of hops. In fact, we used 7 different hop varieties which gives the beer enough hop flavor to blow your head off into a few thousand pieces." Otherwise known as a hangover. Anyway, they actually made enough Killsner to sell online. So, if you can't make GWAR-B-Q and don't mind a brewery's name evoking notes of the mouth of Bunk Moreland, there are some suds to drown your sorrows.

In related news, GWAR's theme restaurant called GWARbar did not make it's $50,000 Indiegogo campaign goal, but they're forging ahead with the place anyway. Which is good, the world needs a GWARbar. Unlike attending their shows where the threat of being doused in fake viscera and body fluids, GWARbar promises to only be a five-napkin type of joint:

It turns out that 46-year-old Derks (stage name: Balsac the Jaws of Death) has worked in restaurants and bars for more than three decades. Other than touring with GWAR, which describes itself as "Earth's only openly extra-terrestrial rock band," Derks said hospitality work "has been the one job I have been able to keep." - [Washington Post]

That said, be careful when requesting "extra sauce." GWARbar hope to be open in September.

Of course, with all of this GWAR news and merch still hitting the market, one wonders whether GWAR will just keep on GWAR-ing along, even without Dave "Oderus Urungus" Brockie. Metalinsider.net stopped wondering and took the time to ask. Turns out the answer is, well, yep. Jizmak Da Gusha:

There will be a fall US/Canadian tour from Gwar this year, and it will address the mythos of what happened to Oderus Urungus and give the fans, the Gwar fans that we love so much, a way to come pay their last respects and see the band that they love. It's an exciting time, and it's also scary because it's a daunting task, but Gwar is always up to the challenge. We gotta saw off a couple heads to get there, no problem.

While those dates have yet to be nailed down, you can catch the band at GWAR-B-Q and Chicago's Riot Fest in September. Or you could get drunk. GWAR have offered either option.