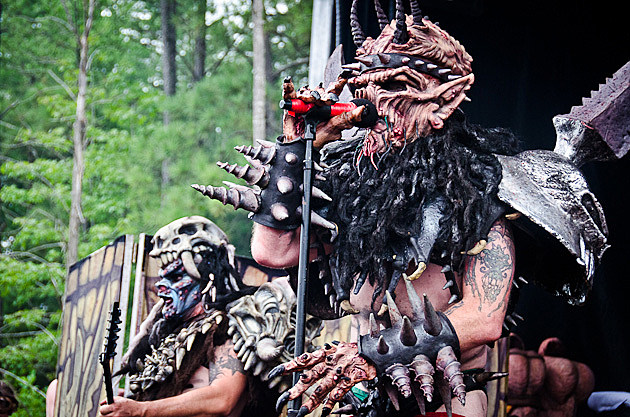 You just can't keep a good GWAR down? The show must splooge on? Never "Sick of You"?

Fans and amateur pun runners (*ahem*) were excited to learn that heavy metal liquid-excreters GWAR are, apparently, still performing. As of right now, the group have two dates on the horizon: one being the 5th Annual GWAR-B-Q (8/16 at Hadad Lake, VA) and the other the Chicago iteration of Riot Fest (Sept. 12 - 14). Maybe the rumor will float around that GWAR will back Danzig for his Samhain set, thus causing the entire internet to burst into flames. Hope you had the last 20 years written down somewhere.

Of course, jokes aside, there is something of a gigantic hole in the GWAR lineup currently: Dave "Oderus Urungus" Brockie. The singer sadly passed away in March, putting the outrageous act's future on ice. But, as long as this continuation is handled with class, it should be okay, right? So far, so good: The original Beefcake the Mighty, Mike Bishop, is reportedly back in the fold for GWAR-B-Q. Bishop played bass for the band from 1987 to 1993 and again from 1998 to 1999. The fact they're getting a past relation is a great sign. Tickets to GWAR-B-Q go on sale June 5.

So, GWAR-B-Q attendees, there will still be a GWAR for you. Riot Festers? Looks that way. The band's website posted the Riot Fest announcement as well, so it's not like a flier typo/mixed signals are at play. (The website announcement added, "Socialize, you human filth!" GWAR, immersion therapy experts.) Innnteresting. Very interesting.

The Live from Antarctica video from 1990 with Mike Bishop in the mix appears below.