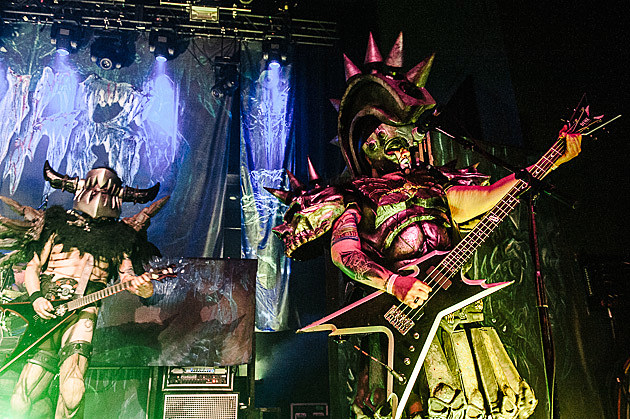 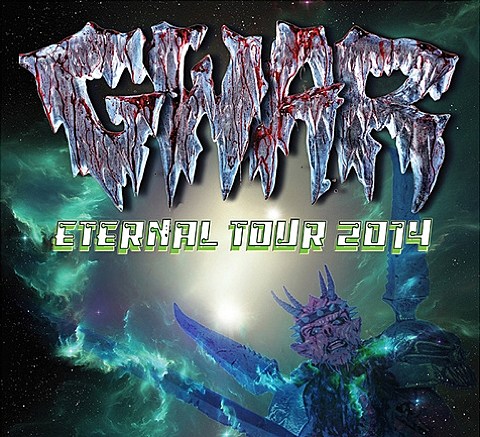 Following a successful GWAR-B-Q where the Oderus-less GWAR appeared up to snuff, the remaining Scumdogs have announced they're heading back out on the road after their Riot Fest Chicago appearance in September. The GWAR Eternal Tour 2014 will bring aboard openers Decapitated (for select dates), Corrosion of Conformity (ditto), and American Sharks. The gore-soaked celebration will start rolling in the middle of October. The two-month long trek will hit cities like Hollywood, Philadelphia, and Buffalo, along with a stop at Austin's Housecore Horror Film Festival. NYC and surrounding areas get shows on October 16 at Starland Ballroom in NJ with Decapitated and American Sharks; November 30 at NYC's Irving Plaza with Corrosion of Conformity and American Sharks; and December 12 at Toad's Place in New Haven, CT with the same lineup as Irving. Tickets for the NJ and NYC shows go on sale Friday (8/22) at noon and 10 AM, respectively. There's a presale starting Thursday (8/21) at 9 AM for NJ and a MetalSucks presale starting Thursday at 10 AM for NYC. Ticket info for the New Haven show here. All dates are listed below.

Of course, as most GWAR tours do, this one has a theme. According to BalSac The Jaws of Death:

Dark clouds of war and ill omen have gathered around GWAR. In our hour of greatest peril, Oderus has left us and our enemies stand poised, ready to strike while they sense weakness. But we shall no longer cower in our Antarctic stronghold, awaiting Destiny's final blow. This Fall GWAR sets out on the most trying quest of our career. We shall scour our leader's favorite stomping ground, North America, leaving no city unsearched, no venue unraised, and no sheep unmolested. GWAR will venture to the depths of Hell or to the very end of Time itself, and though I fear what we may encounter out there, I know that we can never return home until we have the answer we seek: 'Where is Oderus Urungus?'

It's going to be like Snoopy Come Home! with slightly more blood, semen, and (*sniff*) tears.

As for the tour's openers, Polish tech-deathers Decapitated -- who are opening the first leg -- have a new album on the way via Nuclear Blast named Blood Mantra that will hit the streets on September 26 (preorder). The long running Corrosion of Conformity -- who are picking up the second leg -- released IX back in July. The group has slimmed down to a trio since reforming in 2010, recapturing the crossover/punk spirit of their early career. (Former COC member Pepper Keenan has taken on Down full-time, though Pepper has indicated there are talks of his return.) And newer-comers American Sharks are quickly becoming seasoned tourers, having hit the road with Whores and Clutch this year.

All of the dates along with streams for all of the bands appears below.

*No American Sharks
** Havok plays on this show