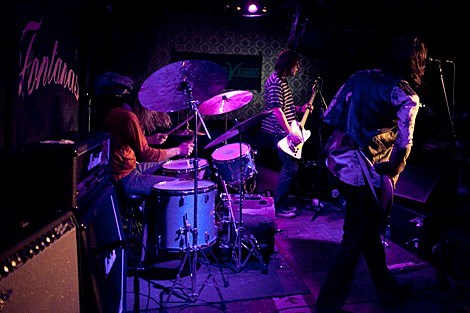 Though we otherwise had an amazing day party at Emo's on Wednesday, I was hit with some unfortunate news around 2pm. GZA wasn't making it due to "issues at Newark Airport". Scheduled to go on at 4:30pm after The Black Angels and before Fucked Up, we scrambled to come up with a solution. Not sure we could pull off a hip hop replacement, BV-SXSW veterans Deer Tick seemed like they might rush in and fill the slot, but that ended up not being a reality so, partially due to the advice of the venue, we decided to just extend the sets of the other bands including Titus Andronicus. I then got a text that Wu-Tang affiliates Killah Priest and 9th Prince were in town to perform with Gza and could still make it over. Too late to really do their own full set, Damian from Fucked Up was more than happy to let the two rappers on stage a few minutes into Fucked Up's set (with Fucked Up as their backing band). Paying tribute to ODB, the mini surprise performance was great and quickly made me forget that we had to tell a packed house that one of the headliners wasn't playing after all. Check out a video clip from it below.

In other cancellation news, Human Eye still lists four Austin shows on his MySpace, but I'm told they are all cancelled including the one scheduled for the BrooklynVegan Anso Presents show happening at Spider House Cafe today (3/18). Turbo Fruits will take their place. See you there at noon!

When you have 91 bands playing shows at a festival as hectic as SXSW (and that doesn't count Monday's NYC gig where we had five four more), I guess cancellations are somewhat to be expected. And there's more. I found out this morning that Beast didn't make it out of Canada. The good news? Crystal Antlers, who we also hosted two CMJs in a row, will take their place on our BV/M For Montreal bill.

Not done yet. Tee Pee band Nebula broke up, thus changing their plan to head to Austin to play five shows. Naturally one of those shows was a BV (Attitude Adjustment at Red 7). Replacement still TBA, and assuming the break up sticks, full tour (March 27th at Pianos included) cancellation still TBA too

Get to BrooklynVegan.com/SXSW to see our entire schedule. Killah Priest video below...