GZA at Rock the Bells 2011 (more by Dana (distortion) Yavin) 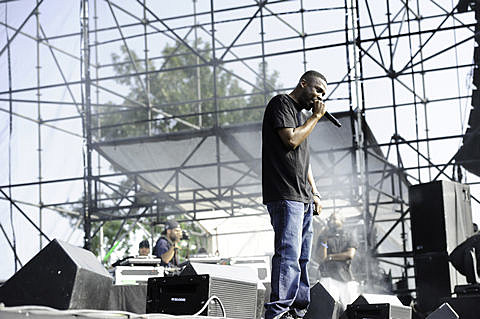 GZA, who is about to play two shows with Bad Brains next week, including one in Brooklyn at MHOW on 4/18 (sold out), has announced that he'll be performing his classuc solo LP, Liquid Swords, in its entirety at Music Hall of Williamsburg on June 14 as part of Northside Festival. He'll be backed by by Austin's Grupo Fantasma like he was at SXSW (videos HERE). Grupo Fantasma's "psychedelic funk alter-ego" Brownout opens the show. Tickets are on AmEx presale now and go on sale to the general public on Friday (4/13) at noon.

GZA released Liquid Swords in 1995 as his second solo LP and first to come out after Wu Tang's Enter the Wu-Tang (36 Chambers). He's toured the album in the past and recently performed it again at Rock the Bells 2011. The videos for "Cold World" and "Shadowboxin" off Liquid Swords are below.

GZA and RZA (who produced Liquid Swords) have been planning a sequel to Liquid Swords which continues to be postponed, but GZA plans to release a different new album, titled Dark Matter, this year.