photo: H2O at Irving Plaza in 2014 (more by Mathieu Bredeau) 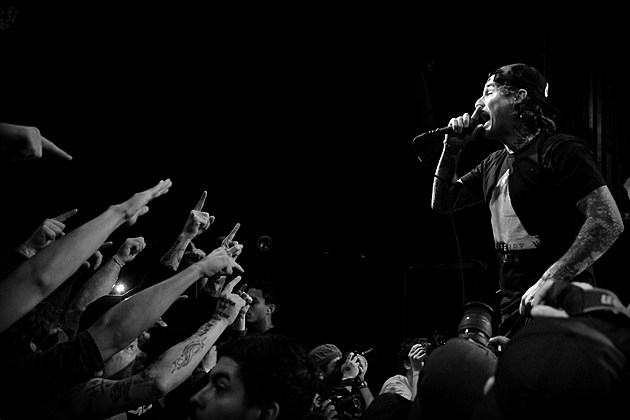 H2O already have four hometown NYC shows coming up in celebration of their 20th anniversary (all sold out), and they since announced that they'll be touring after that with Cruel Hand.

The tour includes another show just outside of NYC at Long Island's Revolution Bar on June 26. That show also includes '80s-era NYHC vets Breakdown, as well as Criminal Instinct, Friend or Foe and High Card. Tickets are on sale now. Updated dates are listed below.

When you're a teenager, you are often quick to fly off the handle, but the more you learn, the better a perspective you have about the world. You mentioned often being controversial: do you feel that the Agnostic Front aesthetic has changed from 1981 to the new record? Back in the '80s you had a lot of songs written about the American skinhead scene, then kind of moved into a punk look, then into the old school hardcore look. Has the look and aesthetic of the band changed and do you feel that, if it has, it has been a logical progression?

Personally I don't think we ever put ourselves with a particular scene. I think Agnostic Front, from the very beginning, has always talked about A. unity and bringing scenes together and B. overcoming oppression. People just put us in different categories. If you ask me about Victim in Pain, it's a punk record. People say "it's a hardcore record," or whatever they wanna say, but that's a Grade A punk record, you know? People are quick to judge books by their covers. The bottom line is: we love living in this country, this is a beautiful country, but we've always questioned authority and the oppression of society and our government. And that's where you may get some of the different things going about controversy or or scenes, or people saying "oh, they're Pro-American" or whatever. Whatever people think about us, if anything we're more American than a lot of people because we truly fight for liberty and justice. People are quick to throw us into different categories, but the one category we will always stay strong to is New York punk and hardcore. And the great thing about a lot of these different movements colliding with each other is that without them we wouldn't have had the great movements that made us possible, like crossover or hardcore. People are quick to point fingers, but the truth is we're just a real American band that want to fight and overcome oppression by any means necessary. We can't change the world, but we understand that we can make a difference, and that's what we're trying to do.

Read the rest here. There's also an ongoing Kickstarter campaign for a new Agnostic Front documentary called The Godfathers of Hardcore. The goal is already met, but you can still donate to receive the various rewards, including a signed, hand-numbered DVD of the documentary, a haircut from Agnostic Front bassist Mike Gallo, and more.

Speaking of NYHC documentaries, Noisey recently revealed the final two segments of their Judge documentary, There Will Be Quiet, which you can watch below. Watch the first two parts here.

Noisey also recently launched their new 'Under the Influence' documentary series with a 25+ minute installment on New York Hardcore. The doc features interviews with Agnostic Front, Youth of Today, Incendiary, Cro-Mags, Texas is the Reason and more, and Rancid's Tim Armstrong narrates. Towards the end, Title Fight talks about Walter Schreifels, followed by a scene with Walter playing TF's "Secret Society" on piano. You can watch that below too.

In other NYHC news, Black N' Blue Bowl is coming up this month with Burn, Madball, Sick Of It All, Crumbsuckers, the Cro-Mags/Bad Brains-related band The Regulators and more (tickets).

And last but not least, Murphy's Law are opening the final Nuclear Assault NYC show happening this September, also with Whiplash (tickets).

List of H2O tour dates and the NYHC videos below...