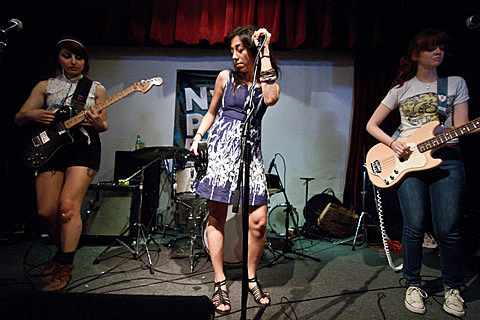 Habibi, Eternal Summers, Caged Animals and Ski Lodge will be this year's lineup for the third Sound Bites series which will take place Sunday afternoons in August at the Fulton Stall Market by South Street Seaport... which I curate. (Shameless plug). There will be a DJ (probably me) at 2PM with the bands playing at 3PM and it's all free. The schedule is this:

Habibi will be opening for King Tuff for a few dates, including the show at 285 Kent on June 9. The band have also just made their first music video, "Tomboy," which you can watch below and features guest appearance by some other bands you may recognize.

Eternal Summers, meanwhile, just announced a late show at Mercury Lounge on July 26 which is most likely a record release show for their fantastic new album Correct Behavior (one of my favorites of 2012 so far) which is out July 24. Check out the video for "Millions" at the bottom of this post. Tickets go on sale Friday, June 8. No openers listed yet.

Caged Animals, meanwhile, just released a video for a new song, "This Summer I'll Make it Up To You," which is off their This Summer EP which is out June 12 on Lucky Number. Caged Animals are also playing Saturday (6/2) at Bobby Redd Project Space in Bushwick with Kent Odessa, Bright Future, Sagopalm and The Zabalas.

And Ski Lodge are next playing Pianos on June 13 with Cool Serbia, The Hudson Branch and new Kanine Records signing Beach Day. Ski Lodge also have a new video for "A Game" which you can watch below. Their debut album will be out later this year.

Tour dates for Habibi and Eternal Summers, and videos for all four bands, are below.

Caged Animals - "This Summer I'll Make it Up To You"