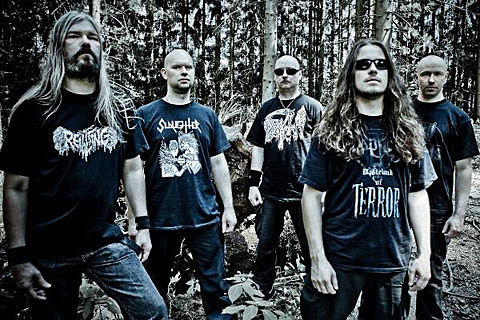 After pummeling us with ...Of Frost and War and the equally crushing Warsaw Rising EP, Hail of Bullets have returned with a new LP called On Divine Winds. Due on Metal Blade on 10/12, the record sees the band continuing their obsession with war, and in particular WWII, with the focus now shifted onto the Japenese Empire. It's complete with the crusty and sickening riffs that you'd come to expect from ex-members of elite euro-death soul-shatterers like Asphyx, Bolt Thrower, and Pestilence. Dig on the severity known as "Strategy of Attrition", streamable below. On Divine Winds is currently up for preorder.

Hail of Bullets currently have a few dates in store for the EU, and only one for the US; the band will appear at Maryland Deathfest alongside recent new additions Kylesa, Citizen's Arrest (who are playing NYC with Mind Eraser and Asshole Parade), Dead Congregation, Dropdead (who just played NYC), Funebrarum (featuring Daryl of Disma and Citizen's Arrest), Hatred Surge, Masakari, Regurgitate, Nocturnal, and many many others.

All tour dates, the MDF lineup, some video and the song stream are below.

--
Hail of Bullets - "Strategy Of Attrition" from On Divine Winds