Hailu Mergia at Baby's All Right in December (via BrooklynVegan Instagram) 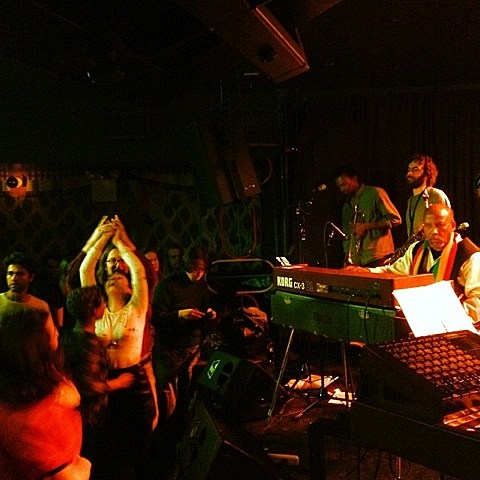 Ethiopian one-man funk band Hailu Mergia got some deserved attention for the reissue of his 1985 album, Hailu Mergia and His Classical Instrument, last year, and that led to him coming to NYC where he played a show (as an eight-man band) at Baby's All Right in December. The NY Times caught the show, and writing very positively of it, said:

At Baby's All Right, Mr. Mergia was backed by seven American musicians who look toward African music, including the guitarist Nikhil P. Yerawadekar, who leads the band Low Mentality. The live guitars, horns and rhythm sections made an earthier showcase for Mr. Mergia's keyboards; he played mostly organ and electric piano, using accordion only for one tune, "Shemonmuanaye" from "His Classical Instrument." Much of the set looked even further back, to the Walias Band. The band's funk was crisp and disciplined, informed by American soul but also at home with the rolling six-beat vamps of Ethiopian funk.

And Mr. Mergia, who never stopped playing music at home, was seizing his new public moment. His solos went snaking up and down the distinctive melodic modes of Ethiopian music: minor scales with non-Western chromatic turns and dissonant zigzags that often come across as both mournful and adamant. On electric piano, he gave them a jazzy sparkle; on organ, they were more pushy, scurrying and circling through the modal scales before climbing up to insistently jabbing notes and chords.

As mentioned, Hailu plays the US again at Tennessee's Big Ears Festival in March, and about two months after that he returns to NYC for a show on May 23 at Le Poisson Rouge. Tickets for that show are on sale now. No other US dates that we're currently aware of.

Listen to a track from ...And His Classical Instrument below...