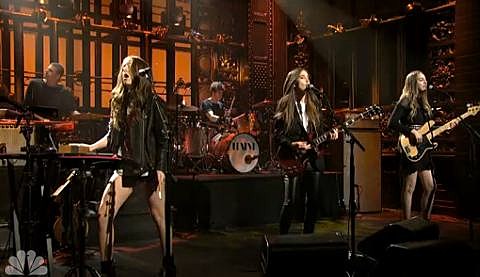 Haim just made their SNL debut over the weekend, playing "Don't Save Me" and "The Wire," as well as appearing in a sketch that uses The Outfield's mega-'80s hit "Your Love" in a pretty funny way. It was a highlight of an especially lackluster episode of SNL, and you can watch all three clips in this post. Since their appearance, Este Haim's "bass face" -- already an internet meme -- is now full-on sensation, perhaps you've seen it on your Facebook timeline via every one of your friends.

In other news, both of Haim's Terminal 5 shows in May -- including the second show which was just added -- are sold out.

Meanwhile, Saturday Night Live has announced the hosts and musical guests from the remainder of 2013 which looks hopeful on the funny front: Paul Rudd hosts on December 7 with a second appearance from UK boy band One Direction; and John Goodman returns for his 13th hosting job with Kings of Leon as musical guests.

Then on December 21, SNL gifts us with what will be the year's most anticipated show: Jimmy Fallon will host with (surprise!) Justin Timberlake performing. SNL writers usually bring their A-game to a JT episode (expect a return of the Brothers Gibb), and this one will also be a way to remind folks that in the new year, Jimmy Fallon will be moving to The Tonight Show and current "Weekend Update" anchor Seth Meyers will becoming the new Late Night, both of whom will start their new jobs on February 24.

Haim's SNL performances and that Outfield sketch below...