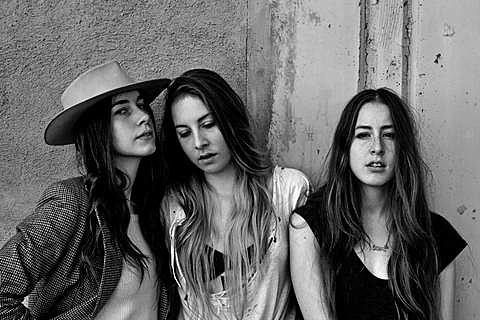 "We used to do covers of rock songs by musicians like Billy Joel and Santana," middle sister, guitarist, and lead vocalist Danielle Haim, 22, explains. "Dad played drums, Mom played guitar, Este played bass, and Alana played everything else." Unfortunately, teenage rebellion comes in many forms (even in the laid-back Haim household) and, growing up in Los Angeles in the late nineties, the sisters were much more interested in what was playing on local pop radio stations like KIIS FM. "I think we were pushing out against our parents a bit," says Este, 24. "Every Sunday they'd put on 'Breakfast with the Beatles,' but we'd always want to switch it over to something like TLC, En Vogue, or Brandy and Monica."

Los Angeles sisterly trio Haim are currently visiting NYC, having played Santos last night (anybody go?) and will be at GLasslands on Saturday (5/5). You can download their Forever EP from their website. It definitely owes more than a little to '80s Fleetwood Mac and early '90s Top 40.

Tomorrow's show at Glasslands is with Team Spirit (Ayad of Passion Pit) and Workout. All upcoming tour dates are below