Bruce Springsteen @ Izod Center in May (more by Tim Griffin) 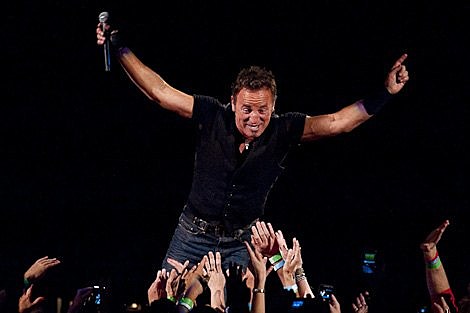 Reports on the Rock & Roll Hall of Fame 25th Anniversary show have been confirmed. The two-night event will be happening at Madison Square Garden on October 29th & 30th. The lineup for those shows will include...

"Stay tuned for more information on special guests yet to be announced."

"American Express cardmembers have access to advance tickets Monday, July 27 at 9AM to Sunday, August 2 at 9PM, before they go on sale to the general public on Monday, August 3 at 9AM. For once-in-a-lifetime VIP Benefit Packages priced from $25,000 to $100,000, email rockhall@eventassociatesinc.com. For other Special VIP Benefit Packages priced from $750 to $5,000, go to ticketmaster.com." The cheapest ticket price is $79.50.

More info on the show's various sets and collaborations from Rolling Stone, who is helping to produce it, below... 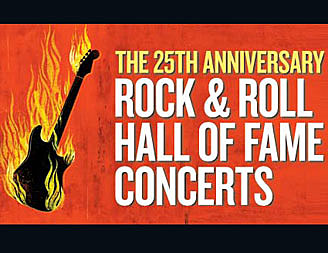 Sprawling across October 29th and 30th at New York's Madison Square Garden, the shows will feature Hall of Fame acts sharing the stage with guests and collaborators, honoring their influences and essentially retracing the history of rock in the process. For example, Crosby, Stills and Nash will share the stage with California-based artists while Metallica will lead a hard rock portion of the concerts. Stevie Wonder and Aretha Franklin will also each front a soul revue with Paul Shaffer and the CBS Orchestra.

"These once-in-a-lifetime concerts are designed to celebrate the artists and their music," said Jann S. Wenner, founder and editor of Rolling Stone and the event's executive producer.

The shows are presented by American Express and shaped by a creative team that includes Tom Hanks, his producing partner Gary Goetzman, Robbie Robertson, Cameron Crowe and Wenner himself, among others. Joel Gallen, the producer behind the Rock & Roll Hall of Fame induction ceremonies, will direct the shows, which will be cut into one highlight special airing on HBO.

All proceeds from the concerts go towards creating a permanent endowment for the Rock & Roll Hall of Fame Foundation and Museum. "Twenty-five years ago a group led by legendary Atlantic Records founder Ahmet Ertegun created this foundation to recognize and celebrate the music and careers of artists whose music helped shape and define our generation," Wenner said.

AMEX cardholders get first crack at tickets on July 27th, and ticket sales will open to the general public on August 3rd.

The Rock Hall is also planning a book and deluxe DVD set to mark its 25th anniversary. The Rock & Roll Hall of Fame: The First 25 Years will be published by Collins Design in September, and in August, Time Life will issue a nine-disc box set of highlights of the past induction ceremonies including never-before-seen footage. [Rolling Stone]