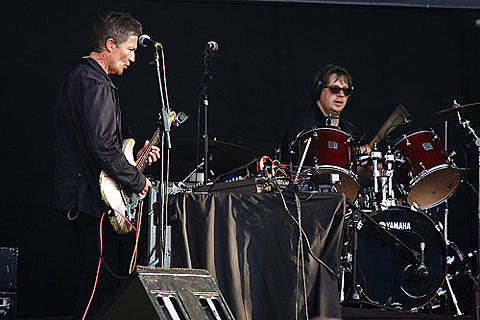 The wealth and breadth of musical treats on offer at Barcelona's annual Primavera Sound Festival hit home with a suckerpunch on Saturday May 29th at 7pm, when I was forced to choose between live sets by The Clean, Michael Rother's new project "Hallogallo 2010", playing the music of NEU! and Harmonia, and Van Dyke Parks. After much deliberation I chose The Clean. My consolation prize for being forced to reject other such riches came during the walk over. The seaside stage The Clean were playing on was only accessible by first walking past another stage, where Michael Rother and pals Steve Shelley (Sonic Youth, drums) and Aaron Mullan (Tall Firs, bass), were playing what is perhaps the definitive piece of motorik Krautrock, "Hallogallo", by Rother's legendary '70s Düsseldorf duo NEU! I hung around for a few minutes, then headed over to see a few songs by The Clean, one of which ("Tensile") drummer Hamish Kilgour dedicated to Rother. Heading back to the WFMU tent to begin our broadcast day, I stopped to linger in the sweet spot where the sounds of both bands collided, then procrastinated more at the Rother stage again to soak up the melancholy majesty of the Harmonia track "Deluxe (Immer Wieder)".

In an age where "heritage" acts are propped up to play their catalog on-demand for crowds ravenous to devour them in order to chalk up some bogus experience, a cynic might find something crass in the presentation of this music today; a purist might consider Rother's longtime partner, the late Klaus Dinger, irreplaceable. And it's right for a fan to always be on guard against the creep of hired-hands, or an artist's alienation from the art s/he created many years ago. I was prepared for disappointment; I got transcendence. Shelley and Mullan showed a sympathy to the music worthy of the people who created it. The power of this music filling limitless space and spreading outward to the Mediterranean Sea bordered on the religious. Give thanks and praise to Rother, Shelley and Mullan for allowing us to share their set with you. [WFMU]

WFMU's review of Hallogallo 2010 at Primavera Sound also includes the audio from the set, which is streaming at the link.

Hallogallo 2010 will be in NYC for Lincoln Center Out of Doors Festival on August 6th. Their other US shows currently include Philly, ATP NY, Columbus, Ohio, and a newly added date at Maxwell's on August 4th, where they perform as performing as "Michael Rother and Freunde." Tickets are on sale.

Videos from Primavera and all tour dates are below...