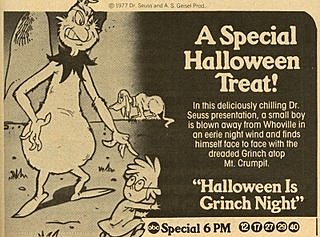 This little-known sequel to the much-better-known 1966 hit, "How the Grinch Stole Christmas" came out in 1977 as a TV special. It's worth noting that the only mention of Halloween is in the title (indeed, starting in the late 90's, it was released under the name "It's Grinch Night," leaving Halloween out altogether). However, the events portrayed here clearly take place in late autumn. Grinch Night, perhaps, is the Whoville equivalent of Halloween. [Wikipedia]

The music for Halloween is Grinch Night was done by Joe Raposo and thanks to YouTube, you can watch the entire obscure cartoon below...