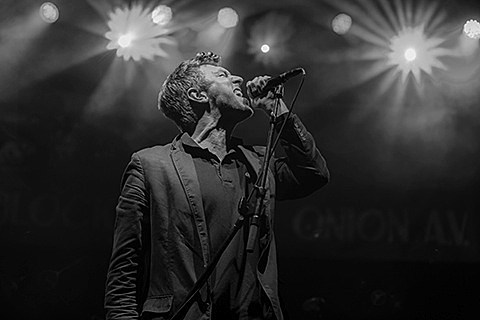 Hamilton Leithauser, who put out his first solo album earlier this year, is currently finishing up his opening stint on the Broken Bells tour, which hits Central Park Summerstage on Friday (9/26, tickets).

UPDATE: Despite what Brooklyn Night's Bazaar's website says, the onetime Walkmen frontman is not playing Brooklyn Night Bazaar on Saturday, October 4 as part of a Communion-presented night that also features Wilsen, Salt Cathedral, Nepotist, Skyes and Mumford & Sons' Ben Lovett as DJ for the evening. The show is happening, but Hamilton is not playing. Like most BKNB shows, it's free and you can RSVP to skip the line.

Communion are also presenting the October 3 BKNB show with The Dough Rollers, Pine Barons, Stone Cold Fox, Dreamshow and a "Special Guest TBA" headliner. You can RSVP to skip the line for that one too.

After his Brooklyn Night Bazaar show, Leithauser will head to the UK to open for Spoon (who he toured North America with this summer) in London. All dates are listed below...