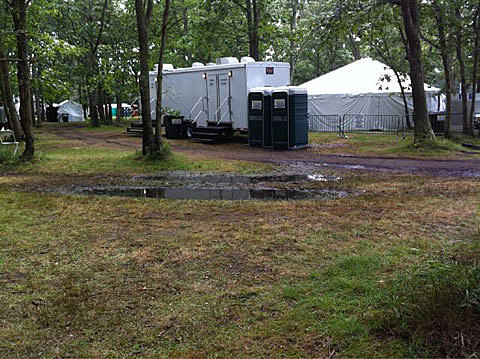 Yesterday it was officially announced that next weekend's East Hampton MTK music fetival was cancelled, AND THAT tickets would be honored at this weekend's Southampton music festival Escape to NY which wasn't exactly packing them in, especially on Friday. Well, so much for that plan. Escape to NY has just officially cancelled today, alledgedly due to all the rain that soaked the grounds last night and the rain that's still coming too. The cancellation came after a long delayed opening that had people sitting in the parking lot waiting to finally hear the news. Of Montreal was among the bands set to perform at the fest tonight.

Dana (Distortion) Yavin was onsite all weekend taking pictures for BrooklynVegan and is on her way home as we speak with shots from day one and day two. Stay tuned.

P.S. Q-Tip has also cancelled his Brooklyn Bowl DJ gig tonight, but will be replaced by Reptar and a DJ set by Talib Kweli.