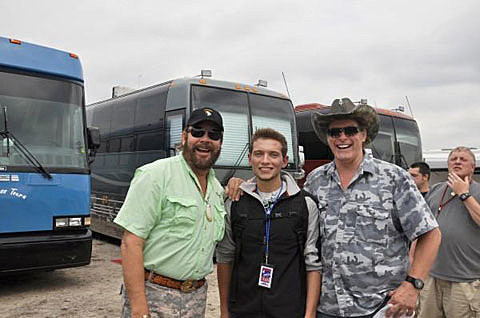 Not to be confused with Hank 3, Hank Williams Jr played "to a crowd of nearly 8,500 at the Iowa State Fair Grandstand Friday night." More interestingly:

For a good portion of the concert it seemed like Williams had moved beyond issues of politics and was putting the focus on the Bocephus party. But those made their way back into the show in a much more straightforward way later in the set.

Following the song "We Don't Apologize For America" a chant of "USA, USA" broke out amongst the crowd. Williams smiled, telling the crowd that he was their mouth piece and adding:

"We've got a Muslim president who hates farming, hates the military, hates the US and we hate him!"

The cheers that followed were loud and enthusiastic.

When reached for comment Saturday, Brad Anderson with the Obama campaign in Iowa said in an email, "That type of absurd nonsense doesn't really deserve a response."

True enough (the part about it not deserving a response).

In related news, Republican vice presidential candidate Paul Ryan likes Rage Against the Machine but naturally they don't like him.