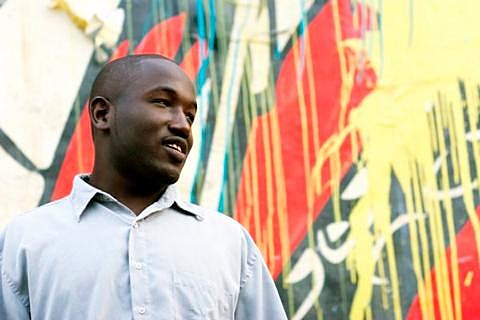 Eugene Mirman, who just guested at the last-ever Hot Tub last night (10/1), has another show in NYC tonight (10/2) at The Bell House with a stacked lineup of Dave Hill, Glennis McCarthy, Michael Showalter, Hannibal Buress, Joseph Keckler, and Supercute!. Tickets are on sale for this show, dubbed The Talent Show, and it's a benefit for the I.S. 171 middle school band.

As for Def Leppard fan Dave Hill, he'll also be at nearby Union Hall for "Geeking Out" that also features Glynnis McCarthy, Dana Rossi, Mindy Raf and Ophira Eisenberg. (Tickets). There will be Dave's last shows in the US before he heads to London to do a book tour for his latest tome, Tasteful Nudes.

Meanwhile, you may be aware that Hannibal Buress has an ongoing comedy night residency every Sunday at Knitting Factory in Brooklyn and this week's (10/7) is with Joyelle Johnson, Nick Turner, Akaash Singh, Brooke Van Poppolen, and DJ Roofeeo. Prince Paul DJ'd last week and Chris Rock showed up too.

Hannibal has other upcoming NYC appearances too. He'll be at Comedy Central's "Night of Too Many Stars: America Comes Together for Autism Programs" at Beacon Theatre on October 13 with a large variety of guests including Bill Burr, Stephen Colbert, Tina Fey, Carly Rae Jepsen, Jimmy Kimmel, Tom Morello, Tracy Morgan, Bill O'Reilly, Amy Poehler, Seth Rogen, Triumph the Insult Comic Dog and more. (Carly Rae Jepsen and Tom Morello on the same bill!) Tickets ranging from $130 to $605 are on sale now. Proceeds benefit autism programs across the country. Hannibal will also perform as part of the New York Comedy Festival at Santos Party House on November 10. Tickets for that show are on sale now. All Hannibal Buress dates are listed below.