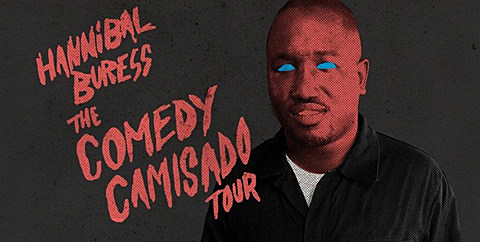 Folks in NYC can catch Hannibal Buress most Sundays where he hosts his free comedy night at The Knitting Factory. Though as he's become a lot more popular -- he's had his own Comedy Central Special and is a cast memeber of Broad City -- and on tour a lot, those nights have become less frequent. He'll be doing a proper set at Knit on November 23, part of their five-year anniversary week, which is sold out. He also has a sold-out show at Town Hall on Friday (11/7) that's part of NY Comedy Fest. You've got a couple other chances to see him this month, as he's part of the Doctors Without Borders benefit (along with Fred Armisen, Jim Gaffigan, David Cross, Regina Spektor and more) at Irving Plaza on November 19 (tickets).

UPDATE: Hannibal has had to drop off the Doctors Without Borders benefit.

For those who like to get out of town and gample, he'll be at Connecticut's Foxwoods Casino on November 22 (tickets) and The Borgata in Atlantic City on January 31 (tickets).

Hannibal has just added a couple NY-area shows to the tail end of his "Comedy Camisado" tour: February 6 at The Space in Westbury on Long Island and February 7 at The Capitol Theatre in Port Chester. Tickets to both The Space and Capitol Theatre go on sale Friday (11/7) at noon.