photo: Hannibal Buress at Terminal 5 in 2014 (more by Greg Cristman) 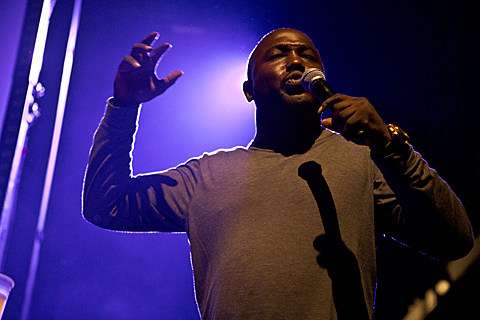 Like BrooklynVegan, British R&B band Jungle and others, comedian Hannibal Buress now has a Spotify In Residence show. Like the others, the premise is that the show curator picks a handful of songs and then talks about whatever they'd like in between. On his new show, Hannibal tells Billboard: "I'm excited for this opportunity to change lives and inspire people with my choice of songs. I haven't had such an influential platform since my 2008 appearance on Comics Unleashed with Byron Allen. Thank you."

His first show is out now, and has music from Raekwon, Busta Rhymes, A Tribe Called Quest, Nas, Kanye West, Eminem, K-Ci & JoJo, Cam'Ron, Lupe Fiasco, T.I., OutKast, Kelis, Lil Kim, Green Day and Lil Wayne. If you're a premium Spotify user, you can hear the whole thing below (free users can hear the music but not the talking segments).

The first and second episodes of the BrooklynVegan show are live, and the third episode is NOW HERE TOO. coming very soon. Stay tuned!