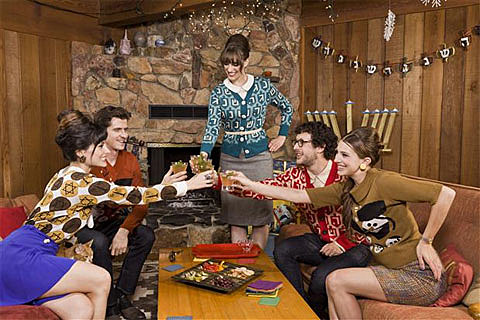 Happy (almost) Hanukkah! It begins tomorrow night (Saturday, 12/8) and in addition to gathering 'round the table for dreidels to play with and latkes to eat, there are plenty of events in NYC that you can attend to celebrate. Jesse Zook Mann and Evan Kleinman's film, Punk Jews, is premiering in NYC next week, and there are a bunch of shows like the Sephardic Music Festival, Matisyahu's 'Festival of Light' show at Terminal 5, and many others. And of course Yo La Tengo play all eight nights of Hanukkah at Maxwell's in Hoboken (12/8-15). YLT always bring out interesting guests to open these shows, but more on that soon (meanwhile leave your guesses in the comments).

In addition to the previously announced Hanukkah shows, there's also a comedy show at UCB East on Saturday (12/8). The show is dubbed Mark Spitz's Hanukkah Spectacularah and the event description reads:

What's a Spectacularah? It's like a Christmas special, but for Jews! Well, it's not just for Jews, but it's certainly not for Nazis . There will be characters, prizes, drinking games, and - most importantly - Jews performing stand up comedy!

Matisyahu just released a new video for his new Hanukkah song. Check that out below...