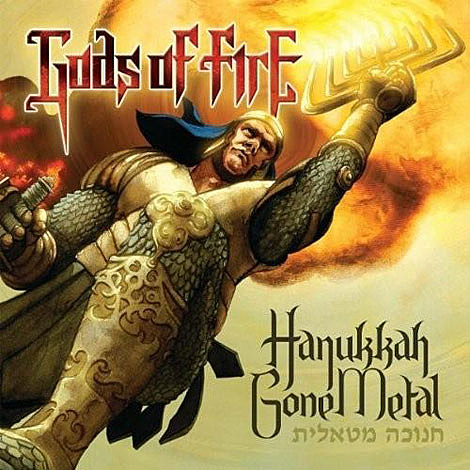 Gods of Fire has crafted a uniquely original work that tells the story of Hanukkah through a rich fusion of heavy metal music, operatic vocals, traiditonal melodies, and a Klezmer soul. The 8 song collection features two holiday favorites, "Oh Hanukkah" and "Havenu Shalom Aleichem," alongside original songs about the menorah, gelt, spinning dreidels, fighting dragons for latke oil and a historical document of the Maccabean war. For fans of Iron Maiden, Manowar, Helloween, Dio, Judas Priest and Dream Theater.

Gods of Fire will support the album with two special Jewish themed shows during the week of Hanukkah. The first is a release party at the Knitting Factory in Williamsburg, Brooklyn on December 12th with a follow up on December 17th at New York City's Fontana's.

That wording comes from the band. You can buy the album at Amazon, and listen to three songs below...