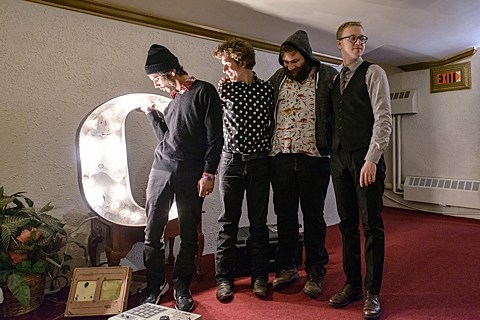 Happiness is the new-ish band (formed in fall of 2013) of Deer Tick members Ian O'Neil, Chris Ryan and Dennis Ryan with Rafay Rashid, singer of fellow Providence band, Ravi Shavi. They recently put out a three song EP which you can stream below.

Happiness will be in NYC for two shows this week, including a headlining gig at Brooklyn's Cameo tonight (6/5) with Virgin Forest (Phosphorescent's backing band) and Heaven's Jail Band, and then opening for Diamond Rugs side project Los Lobos at Highline Ballroom on Saturday (6/7). Tickets for the Cameo show and the Highline show are on sale now.

In related news, folk singer Jonah Tolchin is releasing a new album, Clover Lane, on July 1 via Yep Roc (his first for the label), which features Deer Tick's John McCauley, Los Lobos' Steve Berlin, Chris Scruggs (grandson of Earl), Mickey Raphael (of Willie Nelson's band), and more. He's also got a tour coming up, which hits NYC on June 29 at Rockwood Music Hall with Christopher Paul Stelling (tickets), July 9 at City Winery with Tom Paxton (sold out), and July 11 at The Bell House with Dave Alvin & Phil Alvin (tickets). That Bell House show is one of many dates Jonah is playing with The Alvin Brothers (both of The Blasters), who just put out Common Ground: Dave Alvin + Phil Alvin Play and Sing the Songs of Big Bill Broonzy on Yep Roc this week. You can stream that in full (via The New Yorker) and a track from Jonah's upcoming LP, with the full list of tour dates, below.