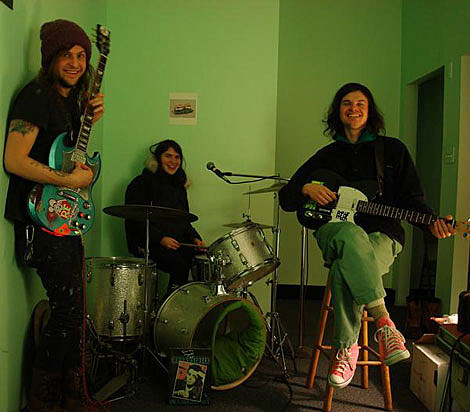 Happy Birthday is Kyle Thomas (aka King Tuff), Chris Weisman, and Ruth Garbus. They formed in November 2008 to play one show at the punk-space "Tinderbox"(RIP), in their hometown Brattleboro, Vermont. Kyle needed a band to play his new pop songs because he was too scared to play by himself. They enjoyed playing with each other so much that they decided to keep doing it. They have now played a total of 5 shows. Kyle sings and plays lead guitar. The songs are mostly his, but the band arranges and finishes them together. He is also a painter and drawer and loves top 40, shoes, texting, comic books, etc. Ruth Garbus plays drums and sings. She also makes her own music and art. Chris Weisman plays "inverted-tuning" guitar, bass, and sings. He makes 4-track songs, enjoys reading and writing, and is a guitar teacher.
-[Sub Pop in September]

Happy Birthday's Sub Pop signing was announced in September, but so far the label hasn't released any of the tracks from the album's worth of songs the band recorded for them (due to be released March 16th, 2010). The record's tracklist is below.

The band was signed only a few months after their first non-Brattleboro, VT show, which happened in Winooski, VT in July. A video from that gig is below. Since then, the group made what we think was their NYC debut at Silent Barn on October 21st (during CMJ) and opened two nights for Devendra Banhart in Burlington and Boston in November.

Happy Birthday are scheduled to visit NYC again on December 12th for a show at Death By Audio with Yellow Fever (their debut album release show) and Vivian Girls
.
Happy Birthday is a supergroup of sorts. In addition to their individual solo projects, Ruth and Kyle are both in Feathers, Kyle (aka King Tuff) is also in Witch, and Chris plays as a duo with Greg Davis.

Chris Weisman (who is not in Feathers or Witch) has a brother named Kurt Weisman who is also in Feathers (who are signed to Devendra Banhart's label Gnomonsong) and Witch (who feature J Mascis as a member).

Ruth Garbus has a sister named Merrill Garbus who recently broke up her band Sister Suvi and is now best known as Tune-Yards.

Ruth (Happy Birthday) just signed to Sub Pop. Merrill recently signed to 4AD. That's a family full of talent with a lot to be thankful for this holiday season. Catch both sisters performing solo on the same NYC bill for the first time at the Stone two days before Christmas.

Happy Birthday album tracklist and a live video of the group (possibly the only way to hear them via the Internet at the moment), below...