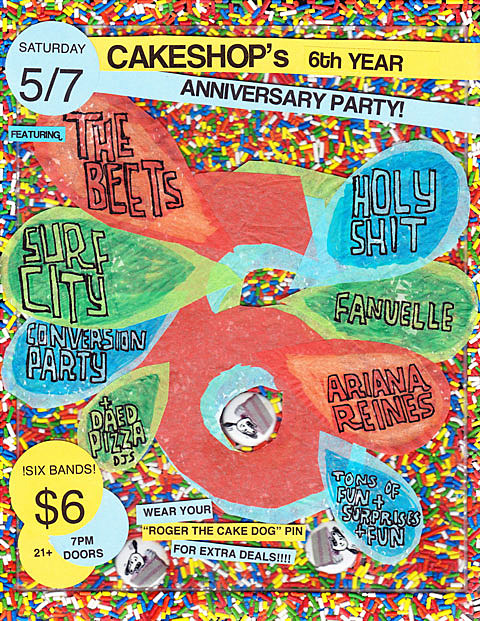 I absolutely hated Cake Shop, which opened around this time back in 2005, the first few times I went. Not the idea of the place, which was fantastic: part coffee shop, part record store, part indie rock venue. More the practicality of the place. The inclined floor meant that you had to (and still do) have to be in the first few rows of people to see anything. I was used to the clear sightlines of Mercury Lounge and Bowery Ballroom and Knitting Factory. What the hell was this?

But the place became hard to avoid if you went to a lot of shows. The people booking seemed to get really good shows, and some surprising ones. And they clearly loved '90s indie rock and Flying Nun. I think it was the in-store with The Bats back in March of 2006 that finally warmed my heart to Cake Shop. It was around this time as well that I learned that if you wormed you way to the front of the downstairs room, not only could you see, there is an intimacy and connection with the bands you don't get at many other "legit" venues. Some of my most memorable shows of the last few years have been there.

While the record store has given way to more couches, Cake Shop remains one of the places in the city to catch emerging talent -- and cool veteran artists almost no one else would book. As previously mentioned, the venue celebrates its 6th Anniversary on Saturday night (5/7) with six bands for six bucks. Headlining are The Beets whose new album, Stay Home, is another fine slab of protopunk folk rock, this time slightly less murky. The guys, who managed to get themselves featured on the Howard Stern Show recently, are heading on tour with Eternal Summers soon and all dates for that are below.

Also playing are New Zealand's Surf City, whose sound reverberates with their country's indie rock past. They are maybe the most Flying Nun sounding NZ band never to be on Flying Nun. The new album, Kudos, is worth checking out. (They're here recording another.) Then there's Conversion Party whose anthemic pop stylings should be more popular (seriously these guys are good). If you can't make it Saturday, they play Cake Shop's sister venue Bruar Falls tonight (5/6).

More bands playing: Holy Shit who is San Francisco artist Matt Fishbeck (and sometimes Ariel Pink). At their website you can listen to what is certainly the only electro cover ever on Felt's "Final Resting of the Ark." Still more: reclusive Faunelle (dreamy, gothy synths) and poet Ariana Reines.