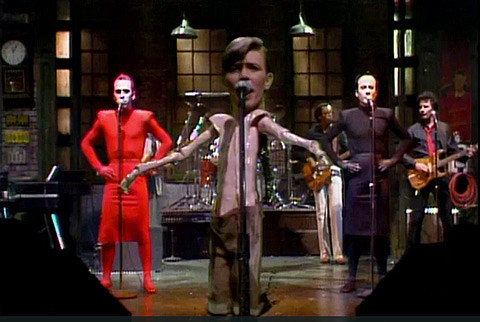 Happy Birthday to David Bowie who turns 68 today. (Today is also Elvis' birthday, he would've been 80.) In tribute, we offer a roundup of recent items related to the Thin White Duke:

It only too 35 years for anyone to notice, but people seem to have just caught on this week that Bowie's 1980 performance of "Boys Keep Swinging" on Saturday Night Live featured a green-screen puppet version of the singer with a giant pop-up penis. It's more than a little ironic, as NBC Censors made the singer remove the lyric "When you're a boy, other boys check you out!" for the performance. The "Boys Keep Swinging" SNL performance is also notable as Klaus Nomi and downtown drag icon Joey Arias are the backup singers. You can watch it, and his SNL performance of "The Man Who Sold the World" from the same episode, below (fast forward to the end if all you want to see is the thrill).

That SNL performance is also when Bowie still had his original extremely British smile, which has since been cleaned up with cosmetic dental work. Some folks preferred his original choppers, such as artist Jessine Hein who has made a hand-sculpted recreation of Bowie's teeth via denture acrylics. See for yourself: 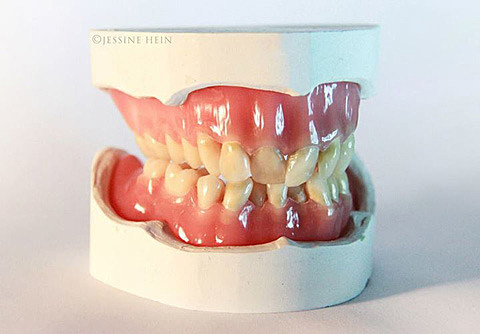 Speaking of art, the "David Bowie Is" exhibit just closed at the Museum of Contemporary Art in Chicago, which turned out to be the most popular exhibit in the museum's history! It featured costumes, original pages of lyrics, storyboards, drawings, concept art and more. There was also a related "Bowie Changes" events series that featured talks with St. Vincent, of Montreal's Kevin Barnes and more, plus a concert where Disappears played Low in full and Bobby Conn played Station to Station in full. The MCA was the only stop for "David Bowie Is" in the U.S. unfortunately, but there is a commemorative coffee table book.

We haven't heard of any Bowie tribute concerts in NYC, but Bowie collaborator Tony Visconti played City Winery over the weekend (1/3) where he played a few of the songs he worked on, with a few special guests (no, not that special):

The perfectly balanced set of 19 songs was selected from the three or four thousand songs that Visconti has played on, produced or mixed over his fabled career in music. The exceptional highlights for Bowie fans included Suzanne Vega's divine singing on 'The Man Who Sold The World', a haunting version of the dystopian epic 'Sweet Thing/Candidate' sung by Richie Barone and a roof-lifting, barn-storming 'Young Americans' sung by Nakia.

Setlist for Tony Visconti's City Winery shows, plus those Bowie SNL videos from 1980, below...