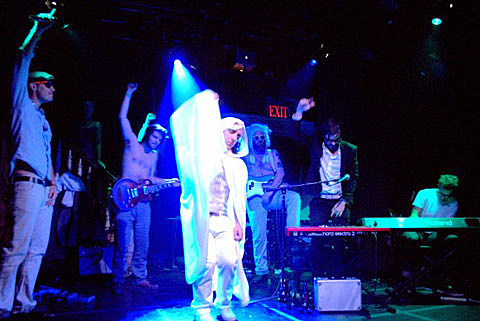 In the midst of a lawsuit releated to the loss of their tour bus in Texas,, Minneapolis soft rock supergroup Gayngs flew back to NYC in late October (the same month they played Music Hall of Williamsburg, Bowery Ballroom and Jimmy Fallon) for a post-tour, one-off, private show at The Box. Why did they do that? Because actor Josh Lucas, who met and saw them on that same episode of Fallon (he was one of the guests too), paid them to come and play his private pre-Halloween party at the Lower East Side club which he partially owns.

Gayngs have no more upcoming shows, possibly ever, but Har Mar can be found headlining venues twice in December. First you can catch him at First Avenue in hos hometown on December 15th, and then he heads back east for the New Years Eve show at Littlefield in Brooklyn (622 Degraw st.). Openers still TBA, but $25 tickets go on sale today, 11/19, at noon.