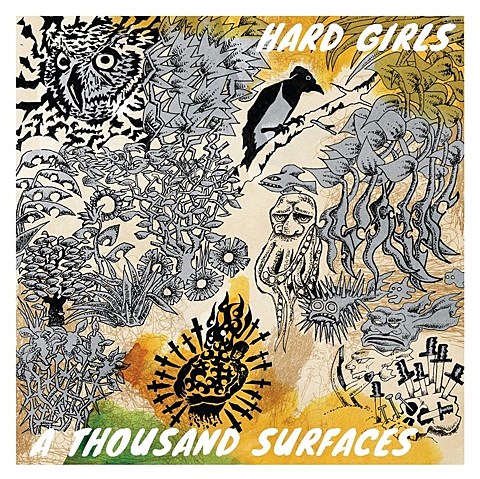 San Jose punks Hard Girls released their sophomore album, A Thousand Surfaces, this past June via Asian Man, and are currently on the road in support of it opening for Andrew Jackson Jihad. After that tour ends, they'll go on their own tour of smaller venues with Long Island's Broadcaster.

We're happy to announce that BrooklynVegan will be presenting the NYC stop of the tour, happening August 17 at Death by Audio. Also on the show is Jeff Rosenstock of the now-defunct Bomb the Music Industry and Will Wagner of Australian folk punks The Smith Street Band. 8 PM doors, $8 admission. All tour dates, including a Long Island show with Crow Bait, are listed below.

If you haven't heard the new Hard Girls LP, you can stream it in full over at Punk News. It follows their 2012 debut and the 2013 LP all three members made with former Operation Ivy singer Jesse Michaels (who illustrated the new album's artwork) as Classics of Love, and is filled with killer melodic punk with a scrappy, indie rock aesthetic. A video and a stream from that LP, with the list of tour dates, below...