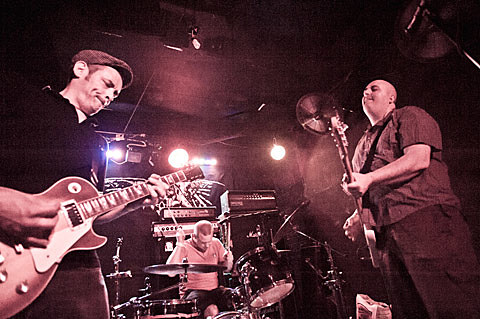 The UK kings of hilarious oi return to the US for a set of appearances on our shores, including known dates in Philly, Chicago and NYC. Look for Hard Skin to return to Acheron on September 12th, snagging support from Brooklyn punks La Misma (check out their demo) & Vanity. Ticketing information is on the way.

Hard Skin recently released their first LPs since 2004's Same Meat, Different Gravy. If you listen to them back to back, you may find that the pair of releases -- On The Balls and Why Do Birds Suddenly Appear -- are pretty similar.

This is a CLASSIC! Well, it's actually TWO CLASSICS! We got some of our sexiest lady mates round to the studio, got them drunk on cheap plonk, and after a few days we had a second version of the album recorded with HARD SKIN as you've never heard us before.

Why Do Birds Suddenly Appear? features vocal appearances from Alison Mosshart (The Kills, Dead Weather), Joanna Newsom, Beki Bondage (Vice Squad), Liela Moss (The Duke Spirit), Miki Berenyi (Lush), Roxanne and Marion of Veronica Falls' and many many more. (Stream at Spotify and get your copies at Feral Ward.

All known dates are listed, along with a video for "Council Estate" are below.

UPDATE: new dates have emerged. Full tour schedule is below.