Boston Strangler at Acheron in 2012 (more by Sarja Hasan) 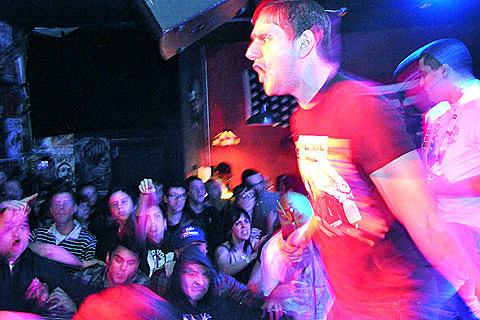 As is generally the case, there's a whole bunch of cool hardcore/punk shows in NYC in the coming months. Here's a rundown of upcoming local shows and tours passing through NYC that you might want to check out:

The excellent UK sludgy hardcore outfit Shrapnel are touring the US and will be landing in NYC for a matinee show at The Acheron on December 6 with their tourmates, DC's Red Death, and New Jersey mainstays Razorheads. It starts at 3 PM and Tickets for the all ages show will be $10 at the door. All dates are listed below.

The following Saturday (12/13), the Acheron will play host to a loaded Massachusetts-centric hardcore bill that will bring appropriately-named Boston-based HC rippers Boston Strangler to town. They'll be joined by fellow Massholes Waste Management, Peacebreakers, Oblivionation, Jock's Blood and Moron. Despite everyone being from the same state, this is actually a pretty varied bill as these things go, with the classicist approach of Boston Strangler, Waste Management's slower chug, and the surprisingly rangy (dare we say poppy) sound of Moron providing some great contrast. Tickets for that one are on sale now.

Just one week later, there will be yet another stacked hardcore show at Acheron on December 20. This one will feature Spain's Orden Mundial, who are also playing that previously-discussed Puce Mary show at Palisades a day earlier (tickets). They'll be joined by Philly crew Blank Spell, as well as locals Mommy and Pox. Tickets are on sale now. Both shows are part of the Spanish band's tour, and those dates are all listed below.

After you flip your calendar to 2015, head to Saint Vitus for more HC on January 1. This show will bring the great Austin band Glue together with local ragers Warthog and the post-punkish Gainesville crew Allergy. The lineup will be filled out by locals Nandas, and tickets are on sale now. Glue have that great, sludgy, groovy Texas sound on lock, Warthog's local reputation speaks for itself, and this should be a great show.

On January 4 at Palisades Montreal post-punk inflected band Proxy will take the stage with Hank Wood and the Hammerheads, who put out the great Stay Home LP earlier this year. They'll be joined by Pox, who are also playing that Orden Mundial show. Tickets for this show are not yet up, but they'll likely be available via Ticketfly.

Long Island's Backtrack will rep New York Hardcore at the Every Time I Die show at Webster Hall on December 12. Also on that show are The Ghost Inside, Architects UK and Hundredth. Tickets are still available.

Crime In Stereo @ BK Bazaar in October (via BV Instagram) 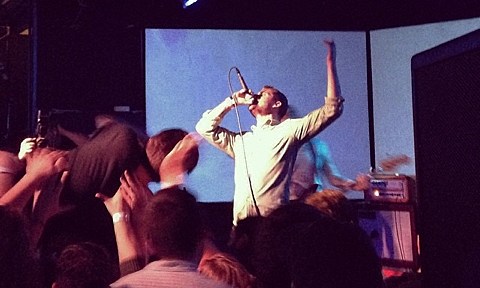 Long Island melodic hardcore crew Crime in Stereo are playing the mostly pop-punk Glamour Kills Holiday Fest at Webster Hall on December 16. Aside from them, that show features PA pop-punks The Wonder Years and a ton of other likeminded bands. Tickets are on sale now.

On a similar note, Comeback Kid will be back on their tour supporting Four Year Strong to play Irving Plaza on January 22. Expire, Handguns, and Heart To Heart are also on the bill. Tickets are on sale now.

This Saturday (12/6) is Madball's 20th anniversary celebration of their debut album Set It Off at the Marlin Room at Webster Hall. They'll be joined by Turnstile, Death Before Dishonor, Take Offense and Downpresser. Tickets are still available.

For something a little less hardcore and a little more street punk this Saturday, Blanks 77 are playing NYC at Grand Victory before they play the Bouncing Souls holiday shows in NJ later in the month. They'll be joined by Dead Tricks, Parasitix and Breaking Sounds. Tickets for that are on sale now.

That about does it for the coming weeks. Did we miss anything?

Check out a whole mess of song streams from these bands, as well as tour dates for Orden Mundial and Red Death/Shrapnel, below...

Hank Wood and the Hammerheads