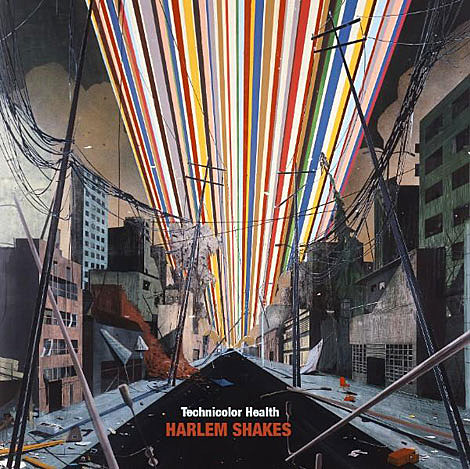 "Technicolor Health was made after and during some tough times (involving serious sickness) for the [Harlem Shakes]. The record captures the weary, hopeful, and sometimes triumphal vibe of that period in their lives. Above all, the album is about surviving abject shittiness. But it's also about what new-wave bands and new-wave revival bands call, "modern life," as lived by five thoughtful men in their early and mid-twenties during a weird, sometimes miserable, mostly thrilling historical moment. Harlem Shakes have been obsessed by pop music their whole lives, and after all the reiterations, they still have great faith in its power to make you and them feel a little better about things, and to say something vital, and God willing, maybe even enduring."

Technicolor Health is a really good album. Gigantic Music doesn't release it until March 24th, but you can (legally) download one of the tracks from the album above. It's the same song they're currently streaming at their MySpace.

On February 24th Harlem Shakes leave on tour with Tokyo Police Club. February 25th, one day later, is the NYC show at Webster Hall that Born Ruffians are also playing. Tickets are still on sale. You don't have to wait that long to see HS though. They're also playing this Saturday night, February 14th, Valentine's Day, at Southpaw with Shilpa Ray and Phil and the Osophers. It's a late show. You can go to dinner and be done with Valentine's Day before doors even open at 10PM. The early show in the same venue is the one Jennifer O'Connor is playing with Mascott. And like tonight's Motel Motel / Holly Miranda show at the same venue, it's part of the Sounds Like Brooklyn festival (as is the Clap Your Hands Say Yeah / Chairlift show tonight at BAM).

Harlem Shakes are also playing a few shows with Bell XI in March. Tickets are on sale for a March 14th show at Highline Ballroom. All dates below...