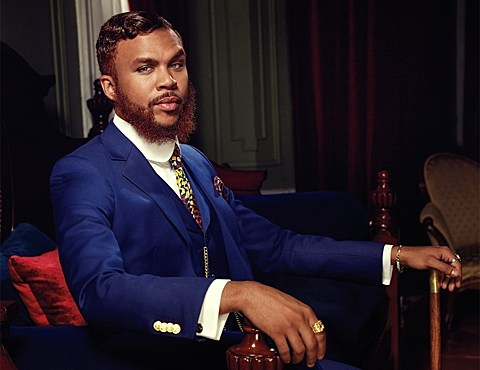 The Harlem Stage's fall 2015 season is currently underway, and continues through December 12.

As far as music goes, upcoming highlights include "Classic Man" Jidenna on November 13, playing Fear & Fancy's SWANK! show with DJ Nana Kwabena and contortionist Master Fluent. "SWANK! provides the ultimate intersection of music, food and community. Elegant Swank Attire and a commitment to leaving your inhibitions at the door are a must!" (tickets).

There's also a Prince tribute with Ben Williams and special guests on December 11 & 12 called Dearly Beloved - The Music of Prince. On the second night, Williams gives a free (with RSVP) discussion beforehand (tickets).

More info on the whole series here and schedule below...

In celebration of his new release and East Coast tour, Christian Scott aTunde Adjuah returns to Harlem Stage to present Stretch Music. Stretch Music is a jazz rooted, genre blind musical form that attempts to "stretch" jazz's rhythmic, melodic and harmonic conventions to encompass as many other musical forms, vernacular, thought processes and cultures as possible. It features a cast of some of this music's most daring conceptualists in terms of their compositional acumen & improvisational sharpness.

As a preview to that evening's 7:30pm performance of Stretch Music, Harlem Stage will present an intimate conversation with Christian Scott aTunde Adjuah discussing the concept and creative process behind Stretch Music.

[THEATER]
TO THE LIGHT (A FANTASY INSPIRED BY TWO AMERICAN GENIUSES: BALDWIN AND DELANEY)
A Staged Reading of a New Play by Bil Wright, Directed by Reginald Douglas
Wednesday - Thursday, October 7 and 8 at 7:30pm
Tickets: Free with RSVP
Commissioned in part by the Harlem Stage Fund for New Work

To the Light (A Fantasy Inspired by two American Geniuses: Baldwin and Delaney) is a play by Bil Wright that celebrates the loving, dramatic, complex relationship between writer James Baldwin (1924-1987) and painter Beauford Delaney (1901-1979). It chronicles their friendship from their first meeting through each of their deaths. Both of these men were highly significant in the history of American arts and culture. They both lived and created during times of enormous political change in the United States, especially in regards to the country's race relations. Both were also enamored with Paris, as were other black artists, feeling it was a mecca in which art prevailed and African Americans considered beautiful both physically and artistically. This was a huge bond between the men, with both men dying in Paris, Delaney the victim of severe mental illness.

Choreographic artist Stefanie Batten Bland will create an evening-length, interdisciplinary work inspired by the structure of jazz with its formal emphasis on the eternal present. Through a collaboration with futuristic jazz ensemble Burnt Sugar The Arkestra Chamber and a visual installation by Batten Bland and Alaric Hahn, PATIENT(CE) will examine the critical relationship that the musical, physical and visual arts have with space and time.

Join us for an exciting masquerade experience curated by Fear and Fancy with a special musical performance by Wondaland recording artist Jidenna.

To kick off the 30th anniversary season of their partnership with Carnegie Hall, Harlem Stage is excited to collaborate with the Carnegie Neighborhood Concert Series to present singer Alicia Olatuja, who electrified a crowd of a million people on the National Mall at the 2013 presidential inauguration with her richly textured, show-stopping solo with the Brooklyn Tabernacle Choir. Olatuja sings with a strong, lustrous tone, and mixes elements of classical, jazz, gospel, and pop into her fluid vocalism. Her busy performance calendar includes collaborating with bassist and husband Michael Olatuja as the Olatuja Project; performing as a soloist with the Juilliard Jazz Ensemble; and providing back-up vocals for Chaka Khan, Somi and Christian McBride.

[MUSIC]
LISTENING SESSION WITH MESHELL NDEGEOCELLO AND TOSHI REAGON
Can I Get a Witness? (The Gospel of James Baldwin)
Thursday, December 3 at 7:30pm
Tickets: $15
Presented with support Barnard College

Join us for an intimate discussion with Meshell Ndegeocello and collaborator Toshi Reagon that provides a first look at the creative process and development of Ndegeocello's new work Can I Get Witness?, a Pan-African Church Service inspired by James Baldwin's The Fire Next Time. Discussion moderated by Rich Blint, Ph.D., Associate Director, Columbia University School of the Arts Office of Community Outreach and Education.

The MoMA's discovery of this extraordinary footage forms the basis for an in-depth program that explores the rich and provocative history of African American performance and its impact on American theater and culture. The afternoon begins with a panel to contextualize the film and the history it highlights. The film, presented with an original score created for the occasion, is followed by a discussion on what it reveals and elicits.

Blending minstrel and contemporary performance styles in its telling of recycled race narratives, the work documents the effort by a community of virtuoso performers to achieve visibility in a time of segregation. The untitled project, mounted around the time that D. W. Griffith began his racist epic The Birth of a Nation, was abandoned in postproduction. Seven reels of exposed film were buried along with the photographic documentation of the black cast and white crew on the set.

Using a series of digital moving-image excerpts from the 35mm camera negative and still frames recovered from the unassembled material, this premiere installation stages a close reading of suppressed moments from the struggle for minority access to visual media.

Assembling a stellar cast of rising stars in the worlds of R&B, funk, soul, jazz and classical, Thelonious Monk Competition Winner and Grammy Award-winning bassist Ben Williams pays tribute to the musical legacy of Prince. Drawing inspiration from his iconic discography, this concert will feature newly imagined arrangements and compositions that celebrate the virtuosity of Prince. A schedule of participating artists will be announced at a later date.

As a preview to that evening's 7:30pm performance of Dearly Beloved - The Music of Prince, Harlem Stage will present an intimate conversation with Ben Williams. He'll share his creative process for Dearly Beloved and discuss the art of re-imagining and arranging works of famous artists.