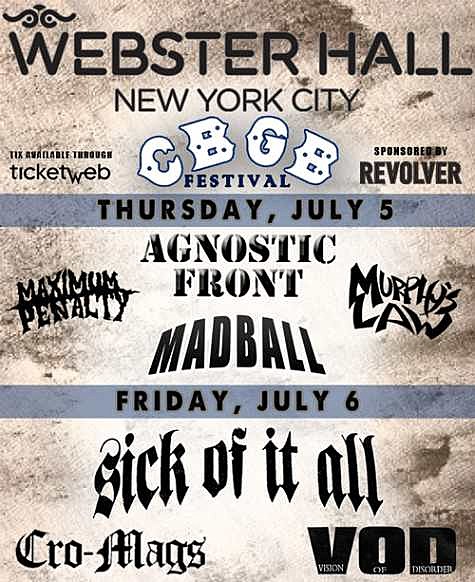 As we were saying, original Cro-Mags member Harley Flanagan told website NYNatives that he was acting in self defense when two members of his old band were injured by him at Webster Hall on July 6th. NYNatives since posted Harley's entire statement...

"According to Harley, he was invited to the dressing room back stage and instead of being welcomed as he expected he was jumped by a group of men. "When I saw that door get pulled shut I was literally fighting for my life. I was afraid these guys were going to kick me half to death, roll me down the back steps and that no one would see it... and there would be no witnesses and that would be that....and all I could think about was getting home safe to my kids...I wanted to save my life, to protect myself and these guys were trying to do me in."

Current Cro-Mags frontman John Joseph, who was also in that dressing room, has since issued another statement that starts with the line, "[Harley's] been watching too many sci-fi movies." The rest below...

[Harley's] been watching too many sci-fi movies.

"First off, Harley was NOT invited to the show. He was told repeatedly by CBGB [Festival organizers] NOT to come. (I have all the texts and e-mails to CBGBs and security.) He was given a CBGBs laminate to attend another event ('American Hardcore' screening) and then used it to sneak into the show. And if he wanted to talk and resolve things, as he claims, why didn't he come before doors where we could [have] taken care of any beef he had? No, he just wanted to come on the stage during show and try and do something to gain press -- well, he got his press alright.

"At 6 p.m. [Harley] texted Louise (CBGBs) and asked her what time we were going [on]. She didn't respond, but warned me. To which I alerted security to let them deal with it, [as] I had a show to do. He showed up 20 minutes before [and] hid in the crowd outside our dressing room door with a backpack and a KNIFE, never knocking on our door and saying, 'Yo, guys... can we talk?' He was also heard ranting outside that he was putting a stop to us playing his music (his music?). And while sitting outside our door told someone else that said to Harley that he doesn't care about the beef he attends both HARLEY'S WAR shows and CRO-MAGS shows, that he was just a fan of the music. Harley's response: 'Yeah, well, fuck you. Some shit's about to go down, so if you don't wanna be involved, keep fucking walking.' He also told people initially that I was in the dressing room when it all went down, making it look like I set him up when a thousand people saw me on stage ready to play.

"Look here's the bottom line: Security was told to come up and they never did. So knowing this dude always carries weapons and his plan was obviously to use the laminate to gain access to the stage while we played and hearing what he was ranting that night, also remembering the whole Dimebag Darrell [late PANTERA/DAMAGEPLAN guitarist who was killed on stage] situation, as we were on stage about to go on, he was asked to come in the dressing room by Mike. When Harley was grabbed to be searched for weapons, the fight ensued and those three took him down where he pulled a knife and began stabbing people. When the security finally arrived, he wouldn't drop the knife and THEY banged him up, not those three. Again, dozens of witnesses.

"Look if you got beef, a show with women and children on stage ain't the place to bring it. I believe those three stopped a much worse situation where perhaps kids could have got hurt who were on stage. And no one snitched -- I refused to talk to the cops. Unfortunately for [Harley], it's a criminal case so no one has to press charges 'cuz he did that shit in a public venue. We have a way of dealing with matters -- it's called 'street justice.' You pull a knife, I pull a pipe and smash your face in. And I did have a pipe on stage, by the way, knowing this dude can't really fight and always has a weapon, as I said.

"DMS are not thugs, so for the new jacks who weren't even around long enough to remember their past and said that -- keep your mouths shut. For the last 10 years plus, they have been security at shows stopping violence, even promoting the Black N' Blue Bowl and other events where there is NEVER violence. If they had been doing security that night, Harley would have never got in and ALL of this could have been avoided. And only Mike is DMS, not the other two, and anyone who REALLY knows him (not you keyboard commandos talking crap anonymously) will attest to the fact that he's the nicest dude in the world and NEVER starts trouble. The other one is a veteran who tried to get the knife away from Harley. The other just a friend of the band. And Mike (Harley's replacement) was the one who got stabbed first.

"Bottom line, [Harley] was told not to come, he showed up right before we went on, he made threats and then he stabbed people. End of story.

"We will make up the show with SICK OF IT ALL as we are discussing another date now, but I wanted to set the record straight.

"Sure, obviously anyone who knows the past (it's all in my book, 'The Evolution Of A Cro-Magnon') knows [Harley] has a problem with me. He talks shit all the time -- I do not. But he knows my bell and where I live. He NEVER rang it once. I told him we can go to the East River and resolve any issues. He refused. So if you wanna believe all the lies and B.S. that dude posts on [Facebook] -- your choice. The truth is an entirely different thing, though. Your sympathy should lie with those who got stabbed, not the dude who did the stabbing and caused this whole problem. So stop gossiping and move on -- that's what we are doing.

"See you in the pit.