"They should be embarrassed that they jumped me and I am going to court for putting them in the hospital." - Harley Flanagan via NY Natives

Harley on a horse 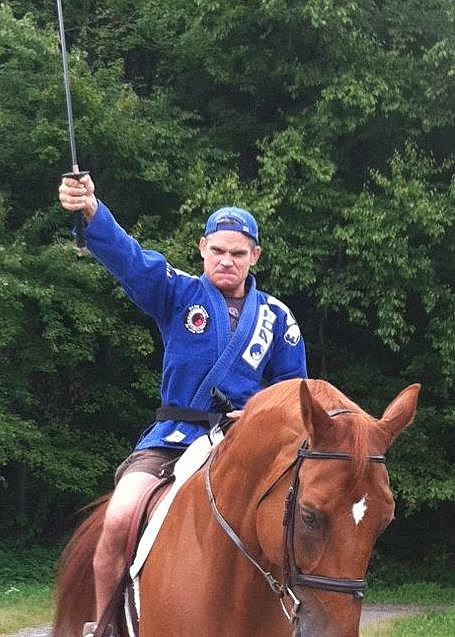 You probably remember the now infamous 'Cro-Mags incident' that took place during the 'CBGB Festival' over the summer, and how Harley Flanagan, who was the one arrested, is claiming he was jumped and that it was all self defense. Vice has an update:

...the state's case isn't coming together as easily as everyone assumed it would. With Harley in court, the judge asks the assistant district attorney what's up. No grand jury has been convened yet, the ADA replies, and the case gets adjourned to Dec. 5.

If the case doesn't come together, with witness statements and testimony and a grand jury the thumbs up to the ADA to proceed, then the clock runs out on the charges on December 8, and Harley can shut the door on the legal troubles stemming from that night in July...

...To hear the other side tell it, Flanagan was crazed on the night of July 6, and may or may not have smuggled the knife into Webster Hall in his ass. Harley, speaking to me, paints a different picture: He was invited backstage and was ambushed, and in a subsequent fight for his life got stabbed, coming out of the VIP room with an oozing leg wound that at first looked like a compound fracture. "The only thing I did wrong that night was go out to the club," said Flanagan on Thursday. "I got jumped by a bunch of wannabe thugs."

Harley didn't know he was in trouble until the cops arrived and he was labeled as the assailant. He spent the next six days on Rikers Island, somewhat of a celebrity because of his case's notoriety. "I was like a white Mike Tyson," he says.

In Rikers, his leg wound, which had been simply stitched up, became infected with staph and MRSA and ballooned, and after being released on bail, he wound up in a hospital bed for ten days

John Joseph is likely claiming that the Harley-sympathetic Vice article is filled with lies. What do you think?