Harley Flanagan is wheeled out of Webster Hall (via NYC Hammers) 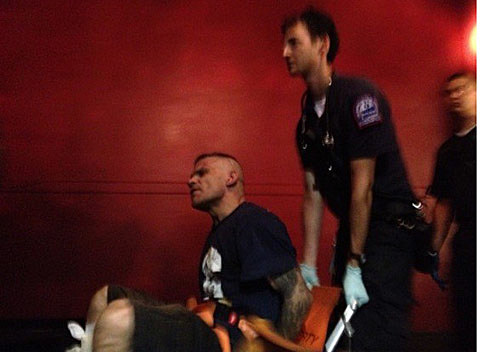 A former member of the hard-core punk band the Cro-Mags attacked two of the group's current members with a hunting knife in a dressing room before a show at Webster Hall yesterday -- biting one and slashing both.
The band was about to take the stage about 8:15 p.m. when tattooed rocker Harley Flanagan, 42, barreled through the East Village venue's VIP section toward the Cro-Mags' dressing room, sending nearly 30 guests on the balcony into a frenzy, law enforcement sources and witnesses said.

"Someone was yelling, 'Get his hands, get his hands, he's got a knife!' " witness Dave Gustav said. "Everything went nuts."

Several beefy security guards rushed to contain Flanagan, who seemed about to boil over before he entered the East Village venue.

...Flanagan, the band's former bassist and founder, suffered a broken leg by the time security finally pinned him down, witnesses said. Cops handcuffed him to a chair and took him out.

"People started booing him and throwing stuff at him," eyewitness Justin Brannan said. "His hands were handcuffed but he still gave everyone the finger."

William Berario, 45, was slashed above the eye and bitten on his cheek. Michael Couls, 33, -- the band's current bassist, who is known in the hardcore world as "The Gook" -- was cut on his arm and stomach. -
[NY Post]

The show, part of the CBGB Festival, was shut down before either Sick of it All or Cro-Mags took the stage. Its a sad day for New York Hardcore. This unity that everyone speaks about? PMA? The time for that is now.

Harley, who did the stabbing, is an original member of the band that formed in 1981. John Joseph, also an original member, leads the current version of "Cro-Mags" that Harley is not in, and which John was calling "Cro-Mags (jam)" for a bit in 2008 to avoid confusion with a version of the band Harley was leading (or for legal reasons or something like that). John's version, which didn't keep the "(jam)" on their name for long, has been having much success the past few years, this CBGB Festival booking included. Harley's version hasn't been active in a while

UPDATE: Here are pictures from the show and a statement from Cro-Mags too..