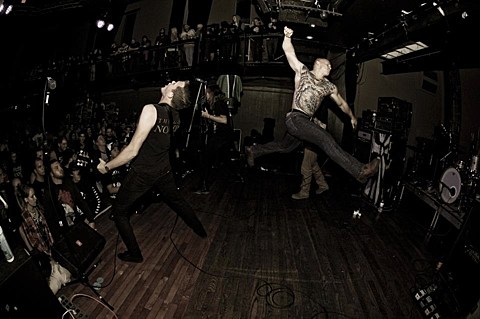 Brutal Chicago hardcore four-piece Harm's Way are setting up to release their latest full-length, Rust, on March 10. The album is their first for Deathwish, and was recorded with Weekend Nachos' guitarist Andy Nelson and mixed by Converge guitarist Kurt Ballou. Harm's Way is streaming "Law of the Land" off the album now -- check it out below.

The band also has a massive international tour schedule lined up in support of the record. They're opening Code Orange's upcoming tour, and then going on a headlining run with Homewrecker and Discourse, as well as an extensive European tour late in the spring. The Code Orange tour doesn't stop in NYC, but you can catch Harm's Way's headlining tour on March 29 at Brooklyn Asylum (1269 Flushing Ave in Bushwick) with additional support from White Widows Pact and Icarus. No advance tickets for that show; $14 at the door.

All dates are listed, with the "Law of the Land" stream, below...