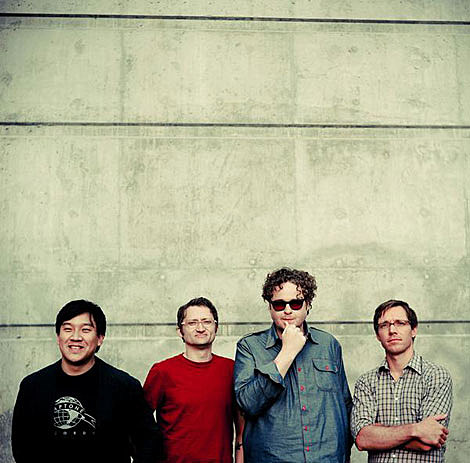 After 15 years, three albums, hundreds of shows, and far more twists and turns than we ever imagined possible, we've decided to put Harvey Danger to rest. The decision is totally mutual and utterly amicable. Everyone is very proud of the work we've done together, but we've also come to feel that our collaboration has--in a very positive way--run its course. We're all eager to try our hands at other projects, musical and otherwise. Chances are we'll all work together in one form or another; if we've learned anything, it's that you never know what will happen. Of course, putting an end to something we've been working on since our early 20s can't help being accompanied by a soupcon of melancholy. Nonetheless, as the Chambers Brothers remind us, time has come today. Rock bands have life spans, and Harvey Danger's has been longer, and more eventful, than even we would have predicted. [Harvey Danger]

The band's Farewell tour consists of six dates (currently). One of those will be Saturday, August 8th at the Bell House in Brooklyn. Opening will be Jukebox the Ghost and Dave Hill's powerpop band Valley Lodge. Tickets are on sale.

The band previously played a "final show" in 2001, which led to a two year hiatus. Read the rest of Harvey Danger's goodbye note, with all tour dates, below...

We've been incredibly fortunate throughout. We've made great friends, shared the stage with incredible bands, worked with truly inspiring people. Beyond question, our greatest good fortune has been the relationship we've been able to maintain with our audience, particularly those who have followed the band through its various phases and line-ups. It's a corny rock band trope to extol the virtues of "the fans," but in all seriousness... The fact that our music genuinely has meant something to people, and that we have been able to get to know so many of those people (both in person and online) and learn about how they connected to our songs--that interaction became a lot more than just a way of connecting to our increasingly private public. It offered the rarest gift: an opportunity to learn what our own work actually meant. We're deeply grateful to those who know they are. Being in this band has been a long, rewarding experience, and without you, it would probably just have been long. We hope that the relatively small body of work we've left behind (a bit more than the Sex Pistols, a tad less than Prince) continues to find a place in people's music libraries. But regardless, it's a legacy that will always mean a lot to us. Thank you for listening.