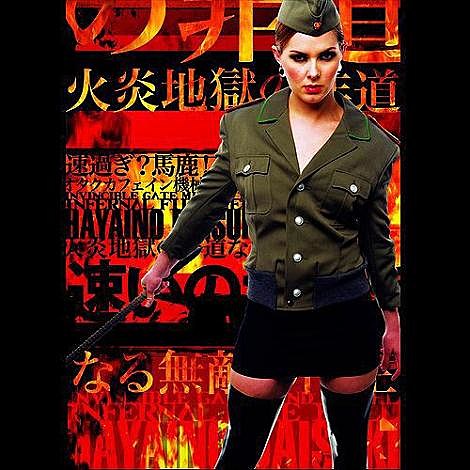 When I was growing up, my mother got caught up in the PMRC nonsense and somehow had the idea that, though it is (wink), metal was "satan's music". I still got my fix by saving my lunch money to buy Morbid Angel and Deicide, supplementing the rest of my collection with high-speed dubbed copies of borrowed tapes. These would shape my tastes to come.

Fast-forward to the present and enter Hayaino Daisuki. Their hyperactive and thrashy melodic grind has always struck me as "Slayer on high-speed dubbing". The band's 2008 mega-ton warhead of an EP, Headbanger's Karaoke Club Dangerous Fire, was fierce. Lightning fast riffs shocked with technicality and impressed with endless power.

Now the band, which features Teddy Patterson (Burnt By The Sun) in addition to Jon Chang (Discordance Axis, Gridlink), Takafumi Matsubara (Mortalized, Gridlink) and Eric Schnee, will release their new EP The Invincible Gate Mind of The Internal Fire Hell, or Did You Mean Hawaii Daisuki? via Hydrahead on 2/23. Dig on the first track "Ghosts of Purgatory" available for download above.

So far Hayaino Daisuki has no concrete touring plans, but Chang/Matsubara/Patterson do- as part of Gridlink with Brian Fajardo of Kill The Client/Phobia. Look for Gridlink at Maryland Deathfest 2010 alongside Converge, Autopsy, Eyehategod, Asphyx, Entombed and many many others.