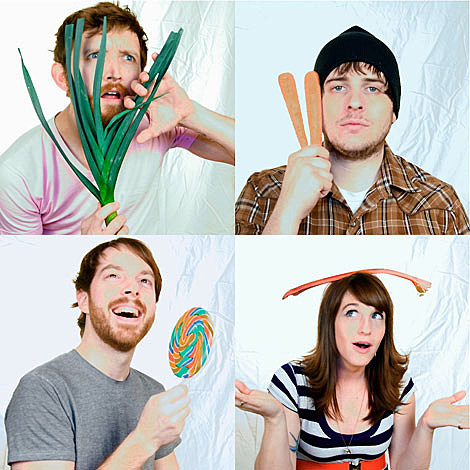 Chicago's Headlights are currently on a short tour with The Love Language. The pair plays a Friday, April 24th show at Brooklyn's Bell House with Modern Skirts. Tickets are on sale.

Headlights are currently at work on the follow-up to their last LP, 2008's Some Racing, Some Stopping. In 2008, the band also released a remixes record -- a limited-edition vinyl pressing of that will be out May 19th on Polyvinyl. The third track from that release, Headlights' "Market Girl" re-worked by the Album Leaf, is posted above along with the more commonly posted TJ Lipple remix of "Cherry Tulips". Full tracklist below.

The Album Leaf has a new disc coming out as well. That record, currently scheduled for a fall 2009 release on Sub Pop, will be the first full-band album by the Album Leaf (formerly the solo project of Jimmy LaValle). The band wrote on its Myspace that the new disc will be "recorded with the full live band (everyone you've seen playing live since 2003) and not just Jimmy."

Headlights played two new tracks from their forthcoming record at a hometown gig in March. Video below with all tour dates...

Headlights - Remixes - track list
1. Cherry Tulips by TJ Lipple
2. Owl Eyes by The Buddy System
3. Market Girl by The Album Leaf
4. School Boys by Cale Parks
5. Towers by Uzi & Ari
6. Everybody Needs a Fence to Lean On by Via Satellite
7. So Much For the Afternoon by Casiotone for the Painfully Alone
8. TV by Son Lux
9. Put Us Back Together Right by Ruby Isle
10. On April 2 by Jason Caddell (The Dismemberment Plan)
11. Your Old Street by Spinnerty
12. Get Yer Head Around It by The Show is the Rainbow
13. Tokyo by Brett Sanderson