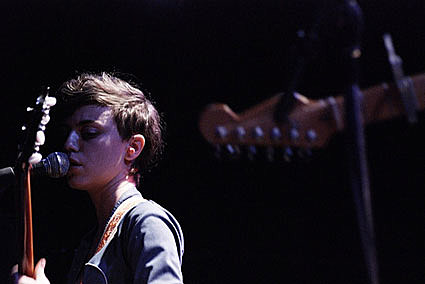 They hadn't announced the openers last time I posted about tonight's Health show at Knitting Factory (11/7). They are: Videohippos and Angel Deradoorian from Dirty Projectors. I have a pair of tickets to giveaway. To win them, email BVCONTESTS@HOTMAIL.COM (subject: Health). Include your first and last name. A winner will be picked and cotacted ASAP.

Angel, who goes by her last name Deradoorian for her solo stuff, recently announced...

Hey I just signed on board to work with the label LovePump United! It's run by two great dudes Mookie and Jake. I will be releasing an ep with them soon. Date is not announced yet, but there will be one some day. Some other cool bands up on LovePump: Genghis Tron, Health, and Indian Jewelry. Sweeet.

She also has a show scheduled at Zebulon on November 28th. Dirty Projectors have a show December 11th at Brooklyn Masonic Temple.

Health has been on the road with NIN, surely playing to many new people on stages bigger than they've ever stepped foot on before. It can't be easy, especially with critics like this one from Jacksonville, Florida...

"Health has a lot to learn and hopefully Nine Inch Nails, who were playing their instruments consistently, will show them the true way to success in alternative synthesized hard rock. Nine Inch Nails did not rely on the short samples recorded into floor based effect pedals like Health did, and played their instruments, as a rock band should. The refreshing performance by Nine Inch Nails should be the inspiration for a new rock generation that plays actual music, not just sound, and respects the old definitions of melody, harmony, rhythm and form."

All Health dates below...