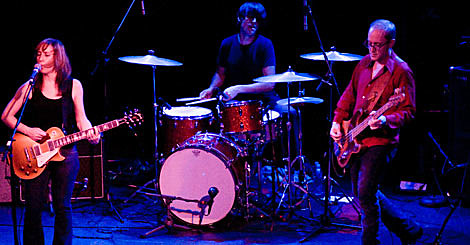 Ohio's Heartless Bastards, led by Erika Wennerstrom, will be opening up the Friday lineup at All Points West this weekend. The only people who go on before them at the Jersey City fest are "College Humor" on the Queen of the Valley, sometimes-comedy stage. Their record The Mountain came out earlier this year on Fat Possum. The title track is above.

Housing Works recently hosted a variety show benefit which featured an acoustic performance by Fiery Furnaces, and will be holding an event with Dredg and Salman Rushdie on October 1st.

Heartless Bastards are on tour through August. They open a bunch of shows for The Decemberists and then for The Avett Brothers. They'll also be making an appearance at the Austin City Limits Festival in October. It's a Texas fest they also played in 2008. They also taped a set for the TV show with the same name last June.

Clips of Heartless Bastards on ACL and at ACL Fest, with all tour dates, below...