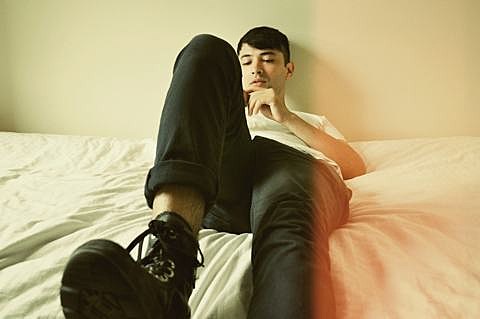 Onetime Beach Fossils bassist John Pena will release Prominence, his second album as Heavenly Beat, next week (10/15) via Captured Tracks. Much like his first record, with lightly plucked classical guitar, synth steel drums, skittering beats and whispered vocals, Prominence could pass for genuine turn-of-the-millenium Scandinavian indiepop (think Kings of Convenience or The Embassy). The production and arrangements are better this time, however, and make for an enjoyably featherlight listen. I like it a lot. You can stream the LP's single, "Complete," below and listen to the whole album over at EW.

Being based here in Brooklyn, it should come as no surprise that Heavenly Beat (which is a full band, live) will be playing some shows at CMJ. He'll play the Cascine showcase on Thursday (10/17) at Cameo (9:40 PM) which also features Shine 2009, Ejecta, Jensen Sportag, Rush Midnight and North Americans (tickets). They'll also play Friday (10/18) at Fontanas as part of a bill that includes Ice Choir, Cities Aviv, Rush Midnight, Mood Rings, Calvin Love, Glass Gang, Ski Lodge, Ghost Wave, Grand Resort and Bright Future. Those are both pretty well-curated line-ups, and chances are if you like Heavenly Beat you'll have interest in a number of the other bands.

Heavenly Beat will also play a free day show at Spike Hill on October 19 with Dead Leaf Echo, Heliotropes, United Ghosts, and Black Books. And if you want to see them outside of CMJ, HB play Glasslands on October 24 with Color Film and Crush Distance (tickets).

All dates are listed, along with a couple Prominence track streams, below...