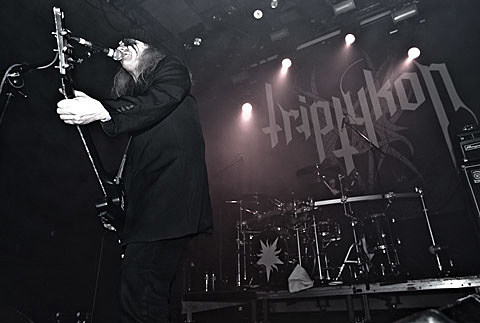 First things first: for those of you who haven't fled town for the holidays already, there are some noteworthy shows this weekend. Tonight, tour-happy USBMers Vattnet Viskar tops a strong local bill that includes So Hideous, Alekhine's Gun, & Imperial Triumphant at the Acheron (12/20). (Tix here.) Saturday night offers one of the year's most notable death metal lineups -- Gorguts, Origin, & Nero Di Marte at Saint Vitus (12/21). The new Gorguts record topped a lot of metal year-end lists, including my own. That show is sold out, unfortunately; if you didn't nab tickets or if blastbeats and growling aren't really your speed, you can always catch Martin Rev (of Suicide) at the Bowery Electric, along with brutal prog bangers Child Abuse and Timo Ellis's new noise rock unit Netherlands. (Tix here.) Don't forget to keep an eye on our NYC Metal calendar for the latest.

One wonders how he'll react to the rest of the Maryland Deathfest lineup when Triptykon plays there next year.

We wrapped up our year-end coverage over at Invisible Oranges this week -- we discussed some notable album anniversaries that we missed, some great independent/self-released albums, and some interesting album covers of both the good and horrendous variety. We also ran personal best-ofs by Richard Street-Jammer, Brad Sanders, Joseph Schafer, and Wyatt Marshall. And, as ever, we ran down all the new metal releases fit to buy.

Oh, and one more bit of IO-related news: we're giving away prize packs from Season of Mist Records, Deathwish Inc., Relapse Records, Willowtip Records, and Prosthetic Records. It's not too late to enter (and win). Happy Festivus.