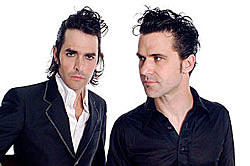 Er, well, I fucked up slightly. It's my first time at The Bowery Electric and I arrive at eleven, thinking that the gig's happening until midnite. By eleven-twenty, Heavy Trash have fully climaxed, and there's not going to be an encore, despite the crowd doing an extremely good job of baying out over the rockabilly/blues disco. Even so, the Heavy Trash experience is so densely intense that such a brief exposure almost feels equivalent to most other combos playing a full gig. The Electric's an impressively cave-like basement den, and Heavy Trash are completely dominating its intimate space. The gangly Jon Spencer is going for a Mexican Elvis look, testifying down on one knee, or down on the floor, or casting his blank gaze up to the ceiling.

Having witnessed his Blues Explosion several times over the years, this is my first exposure to Heavy Trash. It's a natural evolution back in time to rockabilly, and even rock'n'roll, but fed through the Spencer grater, amped up into a frothing frenzy. He's doing his extended band-introduction speech, but the Spencer mind's going blank and he's being fazed by familiar faces in the crowd-front. All of the band are providing sweet-toned backing vocals, magnifying the cabaret-irony vibrations. Spencer's strumming an electrified acoustic guitar, with Matt Verta-Ray handling the electric-twang soloing. Reverb soaks all, not least Spencer's hiccup-ing vocals. The drums and upright bass pick up their pace and there's a full re-launch into song as the Trash deliver their final frenetic surge. Fortunately, they're playing again at Santos Party House next Tuesday nite...

The Tuesday (10/20) show in question is the Panache/NY Night Train CMJ showcase that is happening on two floors of the venue. Flyer and set times below....

Santos' lead-off CMJ date has proven to be a clash of titans, with Michelle Cable's Panache Booking agency being the city's premier source of avant pop and Jonathan Toubin's New York Night Train outfit spearheading the vaudeville punk movement. Though no one could have predicted this marriage of rock superpowers, they have concocted a music lover's wet dream of a line-up. Included on the expansive bill is the abrasively distorted swing of Heavy Trash, fronted by world-renowned blues revivalist Jon Spencer, as well as noise scientists like Dinowalrus, whose mixture of droney pop and experimental tambours have put them on the fast track to indie stardom.