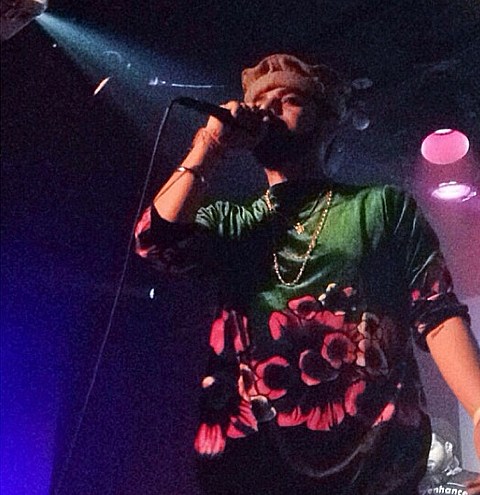 Earlier this week (3/10), former Das Racist member Heems put out his first official solo album, Eat, Pray Thug, and celebrated it that same day at Santos Party House. Anyone go? How was it?

If you missed it, or just need another dose of Heems, he'll play NYC again on 4/20 at Baby's All Right. That show's also with Weekend Money, Topaz Jones, Kahli Abdu and VHS Safari. Tickets are on sale now. His only other announced dates are NXNE, two official SXSW showcases, and the Action Bronson SXSW show.

In other news, the Queens native recently left NYC to move in with his parents at their Long Island home. Gothamist interviewed him about it:

You're living in Hicksville now, right? Why did you choose to move back home... to leave Williamsburg and all that "white drama" you talk about on Eat Pray Thug? My lease ended at the end of April and I just didn't want to sublet or get an apartment again, which I had to do for like years. So I think since around May of last year I've been living on Long Island.

So how's living with the parents? Oh, I love it. It just so happens that my sister and her husband were also living there. I'm on my way back to them right now. [Last night] I had a show at [Aicon Gallery] where I have my art. I had a performance there with the Kominas and Riz MC, they're like this Pakistani punk band and this Pakistani grime artist.

...So then what was it like when you lived in Williamsburg for a while? I liked it at the time. I mean a lot of friends, we were all in bands and it was good to be around your peers. It was a good vibe. But eventually I was like, "This is not the New York I know, the New York I grew up with, that I cherish." That New York's Long Island now.

You can read the rest of that here.

Listen to the Blood Orange collab from Heems' new album, below...