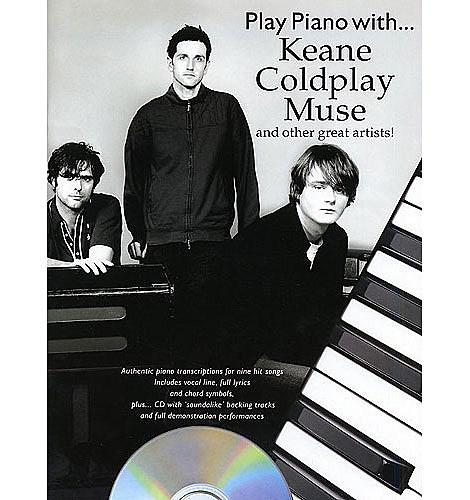 "Keane is not the coolest band to blog about when I'm all indie rock up in your business. I am a slightly apologetic Keane fan. I think there are a few bands that can make dynamic, catchy singles that can appeal to the masses while still be genuine and heartfelt. I can see the fellas sweating over lyrics in studios, rather than thinking what would sell to the Wal-Mart crowd.

More than anything, and the reason I would see the band again in another few years, is that they are an unabashedly energetic live act. Sometimes, I'll take a great live act first. As for tonight, a 90-minute set filled with their hits and the obligatory Springsteen cover to soothe the Jersey folks." [Music Snobbery]

That quote is from Music Snobbery's review of the Keane show that took place at the Wellmont Theater in Jersey on Tuesday. They also played Radio City Music Hall on Wednesday. Portland's Sub Pop-signed band The Helio Sequence were on tour with Keane and opened both of those shows.

Now that the tour is over, The Helio Sequence are going on a headlining tour of their own which starts tonight at Music Hall of Williamsburg (5/28). Also playing the Brooklyn show are Ape School, and the UK's Howling Bells who are currently on tour with... Coldplay! They can trade piano rock war stories. Speaking of which, did you know that...

After listening to Tim Rice-Oxley's piano playing during a weekend at Virginia Water, Surrey in 1997, Chris Martin invited him to join his newly formed band Coldplay. However, Rice-Oxley declined because he did not want to leave The Lotus Eaters, stating "I was seriously interested, but Keane were already operational and Coldplay's keyboard player idea was dropped." [Wikipedia]

Ape School, who are also playing MHOW tonight, is the new project of Michael Johnson who was in the Sub Pop band Holopaw, and in the Lilys in 2006. Ape School's self-titled album was released by Counter on April 28th. RCRD LBL has a track, and you can grab a remix Daedelus did above.

Daedelus has his own Brooklyn show coming up too - this June as part of the Northside Festival.

I have three pairs of tickets to giveaway to tonight's MHOW show. Details on how to win, and all tour dates, below...

TO WIN MHOW TIX: email BVCONTESTS@HOTMAIL.COM (subject: Helio) and include your first and last name. Three winners will be contacted and placed on guestlist ASAP.