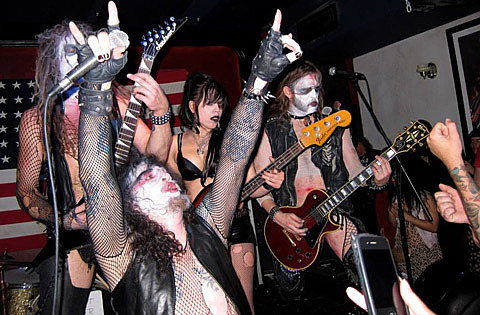 If you've never experienced the over-the-top spectacle that is Hellbent Hooker, you're in luck. The sleazy trash metal four piece -- featuring members of Ramming Speed and Mutilation Rites -- put on a ridiculous live show, one that will be in full force on Saturday (8/24) at Union Pool with Hymen Holocaust and Trashawk. Ten bucks gets you in at the door, but prepare for a gross-out session... in the best ways possible.

Meanwhile, you can also catch Ramming Speed when the band joins Windhand and Golden Grass at Saint Vitus on September 6th. Tickets are still available.

Live video of Hellbent Hooker in action, including a full live set from Grand Victory, is below.