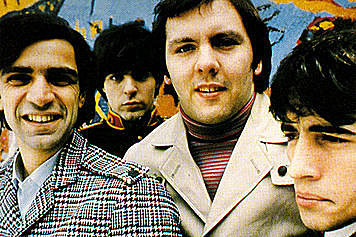 The Rascals' original lineup--Felix Cavaliere, Gene Cornish, Eddie Brigati and Dino Danelli--will reunite for their first public performances in over 40 years with "Once Upon A Dream," a combination concert/theatrical event produced and directed by Steven Van Zandt and lighting/projection wizard Marc Brickman. It's a Rock N Soul dance party meets The Jersey Boys.

In addition to the concert experience, the history of The Rascals, and the history of the '60's through their music, will be dramaticized by a combination of narration, filmed scenes of actors acting out key moments in the band's history, news footage, and archival footage of the band.

There will elements of the staging and light design never seen before just as Marc Brickman has done in his previous groundbreaking work with Bruce Springsteen, Pink Floyd, Paul McCartney, Blue Man Group, the Olympics, and Roger Waters' recent 'The Wall' tour. [Kickstarter].

Steven Van Zandt spent this past weekend with Bruce Springsteen playing shows as part of the E Street Band at Metlife Stadium in NJ. We talked about the first night. How were the second two?